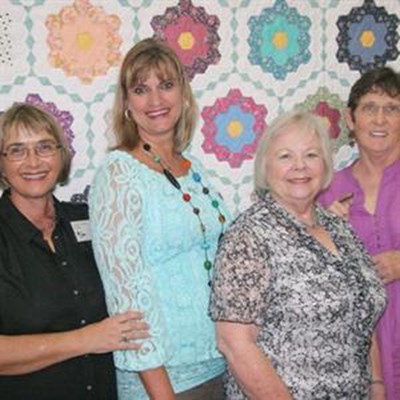 Present at the Outeniqua Quilters’ Guild exhibition held last week are from the left Annette Zondagh, Doreen Crause, Sue Prins (a national judge and lecturer) and Roma Dunn.
GEORGE NEWS - The 25th birthday exhibition of the Outeniqua Quilters’ Guild had as its main objective to display and educate the pu-blic on the art of quilt making.
Everybody who attended will vouch that it was a huge milestone for the Guild.
The Guild is represented by women from George, Mossel Bay and Oudtshoorn.

More than 110 quilts were exhibited in conjunction with the seventh South African National Travelling Quilting Exhibition, that was launched in George last week and officially opened by Sue Prins, an international quilt judge and lecturer.
In conjunction with the George 200 Festival, the Guild members hosted their own exhibition. None of the quilts they put on show had been exhibited before. Visitors were inspired and amazed at the artistic hand and machine-quilted handbags, pillows and quilts.

The Guild is also proud of three of its members, Doreen Crause, Annette Zondagh and Roma Dunn, who will qualify in July as quilt judges.
Posted on: 11:23 Wed, 23 March 2011