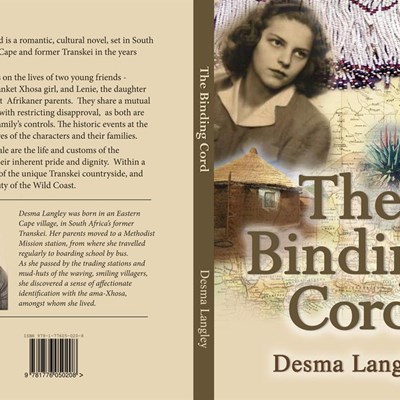 The Binding Cord was first published by Kwarts Publishers in 2007.
GEORGE NEWS - The Binding Cord, a South African Story by Desma Langley, is a romantic, cultural, historical novel set in South Africa's Eastern Cape and former Transkei, pastoral land of the ama-Xhosa, in the years 1924 to 1948.
Langley, who has been living in George since 1981, grew up in the former Transkei and has an in-depth knowledge of the area and its people.
The story focuses on two young friends: Thamsi Tyala, a red-blanket Xhosa girl, and Lenie Jantzen, the daughter of strict, Calvinist Afrikaner parents - the historic events at the time affect the lives of the characters and their families..
The young girls share a mutual love of freedom and the outdoors, with expressed parental disapproval, as both are subject to their family's controls. Their strong individuality comes into play as they mature and the question of future marriage arises.
Many of Lenie's family were in the British concentration camps during the Boer War, and are violently opposed to her relationship with the son of a wealthy English family.
Thamsi is subject to her father's control, who attempts to compel her, against her will, to marry a local ageing chief who has several wives but no heir. Woven into the tale are the life and customs of the ama-Xhosa. The story reveals the inherent pride, uprightness and dignity of the ama-Xhosa, within a canvas setting of the unique countryside and incomparable sub-tropical beauty of the Transkei Wild Coast.
Readers are provided with an insight into the homeland region, from which have come some of South Africa's great liberationists and social activists. Among them being Nelson Mandela, Oliver Tambo and Steve Biko.
Reviews
The Binding Cord has received rave reviews.
Locally, Kappie van Straaten, former senior librarian of George Library, said she found the book a most enjoyable read. "But it was more than that. The information about the Xhosa way of life and their cultural activities, woven throughout the novel, was especially interesting. Having grown up in the Eastern Cape, it took me on a trip down memory lane."
Liz Kruger, of George Child Welfare, said she enjoyed every minute of the story. "The references to the Xhosa culture enriched the book! I want to get my own copy, there's so much information which I'll have to re-read a few times to digest... am so looking forward to The Binding Cord's sequel."
Order your copy
The book is available through mail order at desmalangley@telkomsa.net or on 083 552 1227/044 871 1518.
Copies are sold at R200 per copy. Payment can be made by depositing into an Absa bank account number, which will be provided on request.
'We bring you the latest George, Garden Route news'