Musicians provide 'medicine for the soul' across Lithuania

A military orchestra performed a 15 minute-concert at the Presidential Palace in Vilnius, as part of a nationwide campaign to lift people's spirits.

ENTERTAINMENT NEWS - Hundreds of bands took their music to the streets of Lithuania on Monday to lift people's spirits as the Baltic EU member allowed public gatherings again after months of coronavirus lockdown.

From a military orchestra to pop and folk singers, some 400 bands performed 15-minute sets in cities and towns across the country of 2.8 million people in the government-sponsored initiative.

The widespread merriment called to mind the so-called Singing Revolution, which helped Lithuania and its fellow Baltic states Estonia and Latvia break free from the crumbling Soviet Union.

"Our orchestra is extremely happy to meet and make music again," he told dozens of onlookers after his black-clad musicians performed a piece by Austrian composer Wolfgang Amadeus Mozart.

"We want to share our joy with you because music is medicine for the soul."

Sure enough, Vilnius resident Ona Krimeneckiene told AFP that the brief concert, which she stumbled across accidentally, "boosted my mood."

Lithuania has by now eased most of the social and business restrictions that it imposed starting mid-March to curb the spread of the novel coronavirus.

On Monday, the government gave the green light to public gatherings of up to 300 people and, alongside fellow Baltic state Estonia, stopped requiring quarantine on travel from more than 20 European countries.

The government said the music campaign was intended "to show gratitude to the Lithuanian people for their successful efforts in overcoming the first wave of COVID-19". 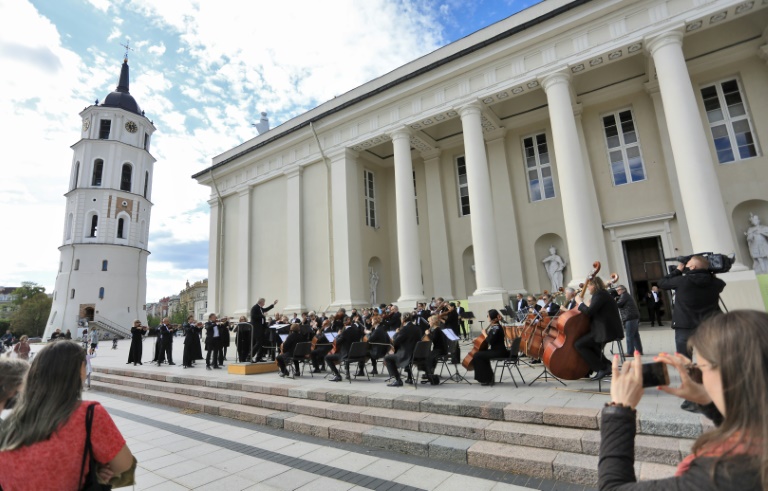 The opposition, however, dismissed the campaign as a public relations stunt ahead of the October general election.

Lithuania reported just three new cases of the coronavirus on Monday, bringing total confirmed cases to 1,676, including 70 deaths - much lower than in most other EU states.

Baltic neighbour Latvia, which still requires foreign travellers to undergo quarantine, on Monday reported no new coronavirus infections for the first time since the pandemic erupted.