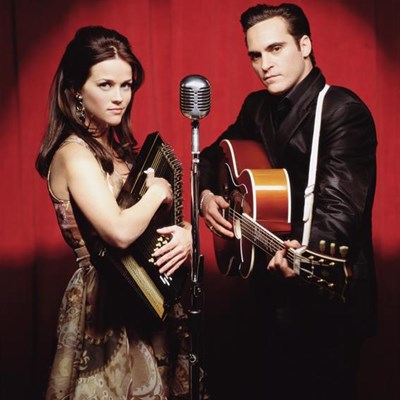 Reese Witherspoon and Joaquin Phoenix star in the captivating Walk the Line as music legends Johnny Cash and June Carter.
SOUTHERN CAPE NEWS - The Monroe Theatre celebrates the power of love next week, Thursday 24 September with the screening of Walk the Line, a biopic about the life and times of American music legend, Johnny Cash.
In this film, a woman's love, given reluctantly, saves a man from addiction and self-destruction. The film traces the life of Johnny Cash from his boyhood, with the loss of a brother and the loss of his father's affection, to 1968 when his outlaw side and his unhappiness give way to the twin triumphs of his concert at Folsom Prison and June Carter's acceptance of his marriage proposal.
Along the way there's his first composition, first recording, first marriage, daughters, being smitten with June, divorce, pills and booze, an empty life, and the Carter family's nursing him back to health.
Joaquin Phoenix (Cash) and Reese Witherspoon (Carter) performed all of the songs themselves, without being dubbed. They also learned to play their instruments (guitar and auto-harp, respectively) from scratch.
Reese Witherspoon and Joaquin Phoenix were both so nervous about having to sing that it caused tension in their relationship off screen. Both actors admitted in interviews that they didn't get along and constantly argued during the six months of singing lessons prior to filming.
It wasn't until filming started that they connected and became friends.
Johnny Cash approved Joaquin Phoenix to play him in the film because he liked his performance in the movie Gladiator (2000). June Carter Cash also approved Reese Witherspoon for her role in the film.
Enquiries can be made with Joan on 082 415 9588.
'We bring you the latest Garden Route, Klein-Karoo, Hessequa news'