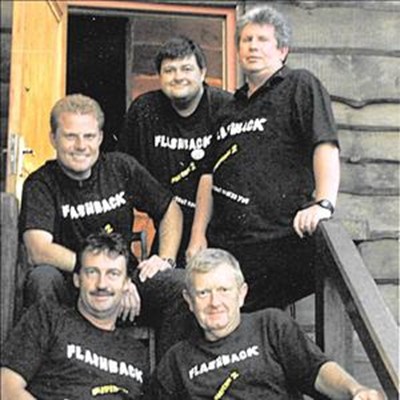 Flashback band members are in front from left Pietie Braaf and Gus Freebury. At the back are Anton Langeneger, JC Nortjé and Gerhard Myburgh.
SOUTHERN CAPE NEWS - Southern Cape rock band Flashback makes a popular return to stage on Friday 21 Sept, with a new show 'Flashback and Friends' at the George Arts Theatre reviving well known hits from as far back as the 70s.

Joining the band on stage will be some local entertainers such as well known blues and rock guitarist and vocalist John McHattie, doing some of his own compositions as well as some rock favourites.

Tokkie Nel, who needs no introduction to locals as guitarist and lea-der of some of the Garden Route's top dance bands, will be playing some of the popular Shadows numbers. A new face is Caroll-Ann Stucki who has been a regular star in many of the Glenwood House productions and whose voice is sure to be remembered by all.

Past Flashback pianist/keyboard player and owner of the George Music School, Alet Koch Lochner, will again join the band on a few songs, and also show her skill as an accompanist with Caroll-Ann.

If the show is as successful as their past shows at the Barnyard Theatre in Mossel Bay the band hopes to make this a regular happening, each show featuring different guest artists from the area, appearing with the band.

"We feel it will be refreshing for the public to hear and see local performers with live backing instead of back tracks, which are used continuously in today's entertainment world" says Flashback drummer Gus Freebury.

The show begins at 20:00 and tickets are R50 per person available at the Arts Theatre or Computicket. Diarise this event as a local production not to be missed.