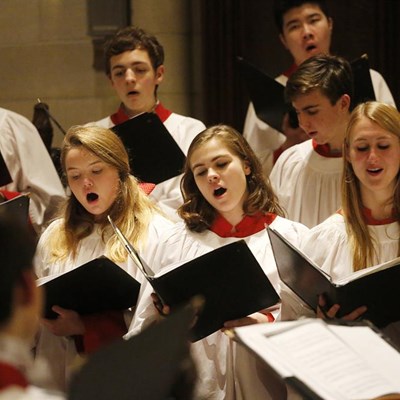 Be sure to see the Groton Youth Choir from Illinois perform in St Mark's Cathedral in George on 16 March.
GEORGE NEWS - On Thursday 16 March, the breathtaking acoustics of the St Mark's Cathedral will resound to the singing of the distinguished Groton Youth Choir from Illinois in the USA who are here on their first international cultural visit of 2017.
They will share the stage in a dynamic choral performance with our local international choral champions, the South Cape Children's Choir, directed by Jan-Erik Swart and accompanied by Sunette van Wyk.
The choir of Groton School, directed by Daniel Moriarty, is one of the most advanced high school singing groups in New England.
The choir sings for chapel each Sunday, preparing a large and varied repertoire of anthems and service music from both the Western Classical Art Music tradition and new contemporary and global music, including the music of the likes of Gabriel Faure, John Gardiner, John Rutter and Billy Joel. Students in the choir improve their vocal technique and sight-reading skills through weekly rehearsals.
Unlike many American schools, Choir is an academic subject that forms part of the curriculum, consequently it never needs to compete with athletics or other priorities.
The first part of the concert will feature the latest repertoire of the South Cape Children's Choir, including Mozart and Schumann.
They will be accompanied by a newly-formed string ensemble led by Rev Johann Engelbrecht of Hartenbos Dutch Reformed Church, which will tour with the Children's Choir as they prepare for the World Choir Games and an upcoming concert tour of Ireland.
The concert starts at 19:00. Tickets are R60 per person and R30 for pensioners and children. Sms your surname, number of tickets and total cost to 084 645 9320 or contact Mimi Haasbroek at 082 585 0632 to secure your seats today.
The South Cape Children's Choir, directed by Jan-Erik Swart, will perform in a joint choral concert with the distinguished Groton Youth Choir from Illinois, USA on Thursday 16 March.
'We bring you the latest George, Garden Route news'