Congratulations stream in for Wayde van Niekerk and wife Chesney

Olympic Gold medalist Wayde van Niekerk and wife Chesney made a creative announcement about their 'bun in the oven'.

ENTERTAINMENT NEWS - Congratulations have been streaming in for Olympic gold medalist Wayde van Niekerk after it was announced his wife is expecting their first child.

His wife, Chesney van Niekerk, shared the news on Instagram in a creative way by posting an illustration of the couple in a park, with Ches hold a flag “Bun in the Oven” and Wayde pushing a stroller behind her full of presents.

Her caption reads: “We are looking forward to this process and to have a healthy and blessed pregnancy. Soon the Vans will be joined by a little Super Van.” 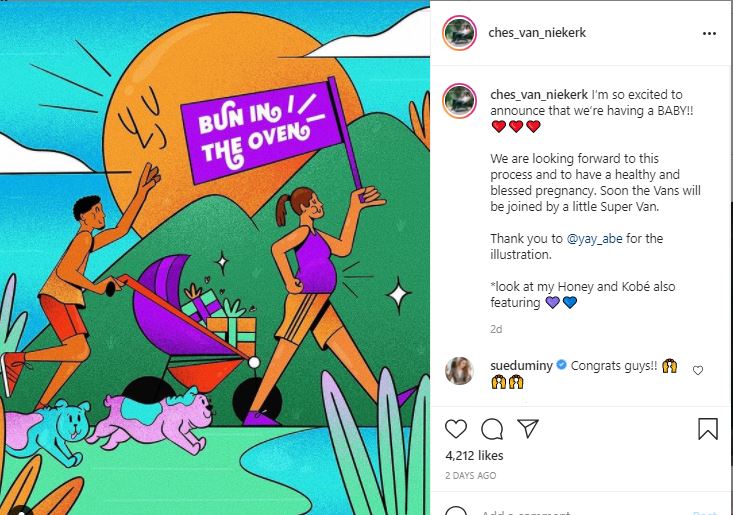 The illustration is by critically acclaimed artist Russel Abrahams, known as Yay Abe.

Wayde also took to social media to share his excitement.

The couple were married in 2018 and in the same year, Chesney made a big academic achievement.

“It finally happened. There’s really no timeline to when you should be achieving anything in life. It took me longer than usual to complete my masters and I obtained it last year already but I could only attend the ceremony this year. I thought walking over the stage isn’t a big deal but it surely brings a sense of pride and closure, knowing that it was all worth it and that this chapter is finally closed,” she wrote.

The Van Niekerks professionally made the move to the US to further his athletics career and hopefully win another gold medal for SA at the Tokyo Olympic Games.

The 28 year old will defend his Olympic 400m title at this year’s games starting later this month.

Van Niekerk, who spent his entire career under coach Ans Botha before joining Brauman recently, struggled to get clearance to travel to the US but he has now landed in Florida.

It looks as the couple are settling in Boston, Massachusetts. “The US has been very nice so far. The people are kind and welcoming. The food is great and the company we keep are the warmest souls,” Chesney said.