By George, it's proms time again! 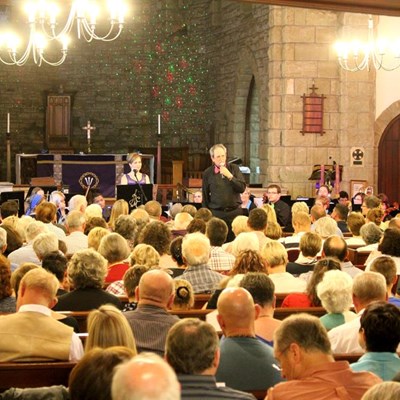 The local version of Last Night at the Proms takes place on 18 March at St. Mark's Cathedral.
GEORGE NEWS - St. Mark's Cathedral will be the venue for a Last Night of the Proms concert presented by the George-based Carpe Musicam! Orchestra on 18 March at 19:00.
The Last Night of the Proms concert is held every year in the Albert Hall in London and is the climax to the BBC Proms, which has been described as the "biggest little music festival in the world".
The Proms is an eight-week summer season of daily orchestral classical music concerts and other events held annually, predominantly in the Royal Albert Hall in central London.
Promenade concerts were originally held in public gardens where the concert-goers could stroll - or promenade - around the garden while the band or orchestra played. Music at these events was normally sourced from current musical entertainments and other popular music.
In 1894 Robert Newman, manager of the Queen's Hall, London, met a talented young musician and conductor named Henry Wood and informed him of his plans for a new series of concerts to be held over the summer. These concerts would, Newman hoped, educate the people about classical music and hopefully make it more popular. The concerts would begin with easy pieces and gradually introduce more challenging pieces of music.
Wood agreed to become the conductor of a permanent orchestra and to help Newman develop his concerts. And so the first of "Mr Robert Newman's Promenade Concerts", was born on 10 August 1895.
The original concerts lasted for three hours and were a mix of classical works in the first half and pieces from popular operas in the second. The tickets cost one shilling for a single concert or a Guinea (£1.05) for a season ticket.
They were called Promenade concerts because a large part of the seating area had no seats and so the patrons had to stand during the performances. This is still true at Proms concerts in London today and dedicated 'Prommers' will tell you that this is the best place to be.
During the original concerts the patrons could smoke, eat and drink as Newman and Wood wanted to keep the atmosphere as informal as possible, although customers were asked not to strike matches during vocal performances.
Wood and Newman certainly challenged their audience. They had Wagner and Beethoven nights, performed works by the leading composers of the day (such as Debussy, Ravel and Rachmaninov) and introduced new pieces of work that they called 'novelties'.
The Proms today consists of over 70 main Proms concerts at the Royal Albert Hall and additional Proms Chamber Music performances at the Victoria and Albert Museum.
There is at least one Prom concert every evening and many of those are preceded by a pre-Prom talk.
The highlight of the Proms season is The Last Night of the Proms, an amazing, bizarre, uniquely British event which is also incredibly popular and tickets are invariably the first to be sold out when they go on sale in mid-May each year.
To meet the demand, open air live transmissions are broadcast by the BBC to Hyde Park in London, Glasgow and the Titanic Slipway museum area in Belfast and the huge crowds that attend these open air events are testimony to the popularity of the Last Night of the Proms.
The Last Night of the Proms concert begins with music representing each of the main themes for the season. During this part of the concert, the Prommers will behave as impeccably as they normally do, even though many are wearing unusual headgear and clothing festooned with Union Jacks and carrying Union Jack flags, in typically eccentric British manner.
But this is not what the Prommers are really there for. They are there for the patriotic finale: Land of Hope and Glory (or Elgar's Pomp and Circumstance March No.1), the Fantasia of British Sea Songs (including the very popular Rule Britannia) and finally Jerusalem, Auld Lang Syne and the National Anthem.
Throughout all of this the Prommers rousingly sing along, bob up and down in time with the music and join in with whistles and hooters! It is quite a sight and sound and a unique atmosphere which really needs to be experienced personally in the Royal Albert Hall.
On 18 March, Carpe Musicam! will be performing most of the Proms favourites and doing their very best to replicate that wonderful Last Night of the Proms atmosphere, with a slight difference - no serious classical music will be played. The entire programme will be light music, slightly jazzy and with a definite swing.
Ticket holders will be regarded as honorary George Prommers for the evening so come along, sing along and just enjoy the sheer pleasure of a musical extravaganza in the beautiful setting of George's historic Cathedral (and bob if you want!).
The performance at St. Mark's Cathedral on 18 March begins at 19:00 and tickets are R80 (under 18's free) and available at the cathedral office in Cathedral Street between 09:00 and 13:00 on weekdays.
Programmes are complimentary so that everyone will have all the words for the sing along numbers and the Friends of the Cathedral will be on hand to ensure that everyone receives one.
Music lovers are encouraged to book well in advance as this popular annual show is bound to sell out very quickly.
(Article prepared by David Stevens, Convenor of the Friends of the Cathedral, using historic notes and observations compiled by Norman Carless.)
'We bring you the latest George, Garden Route news'