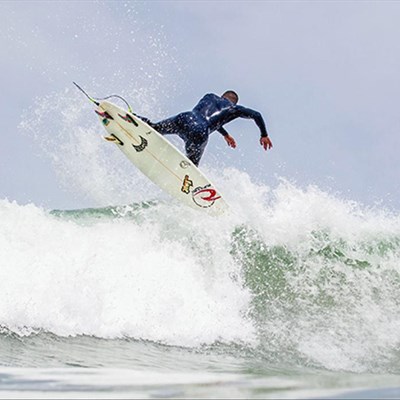 Earlier this year the 20 year old from Steenberg represented South Africa at the ISA World Surfing Games in France where Emslie was the Team Coach.

His incredible victory by a mere one point was greeted with joy by the members of the SWOT Surf Club, his Cape Town Surfriders team mates and by the crowd at the Awards ceremony.

Benjamin, who has come through Surfing South Africa’s programmes, is one of the youngest surfers to win the coveted South African Open Men’s title. 19 year old Cody Coetsee of Ugu Surfriders was third and Llewellyn Whittaker of Eden came fourth in the Final.

Newly crowned SA Women Champion, Olivia Brand of eThekweni Surfriders, was another young surfer to upset the odds when she beat eight time SA Champion Heather Clark of Ugu Surfriders . Brand has not been competing regularly of late and her come back at this significant event should help her change her mind.