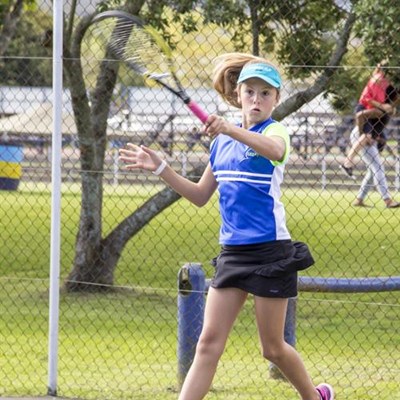 Chandré Boshoff, from George, is currently number 17 in South Africa in the u.12 age group.
GEORGE NEWS - Eden junior tennis has a lot to boast about when it comes to talent. Specifically in the u.12 girls group.Heike Janse van Vuuren, currently number 8 in SA, and Chandré Boshoff, currently number 17 in SA, are both from George. Over the last six months they have had excellent results at Tennis SA tournaments. Currently they are ranked number one and two in the Eden Provincial u.12 team.
Heike finished third at the Junior Nationals in Bloemfontein in March where she competed against the 32 best players in South Africa. More recently she won the Western Province Mini 6 Tournament in Rondebosch in straight sets.
Chandré won the EP Brian Bands Tournament in May and was second in the Coca Cola Tennis SA Tournament in Durban in July. She also won 2 out of 4 Mini Series events in Eden this year.
Chairman of Eden Primary Schools Tennis, Lizelle Fourie, reports: "Another amazing George u.12 tennis player is Naledi Manyube, currently ranked number 5 in the country. She finished 4th at Nationals this year. She is another up-and-coming tennis star from George.
Heike and Naledi have been invited to play in the Tennis SA Masters, where the top 16 players in each age group in the country are invited to participate in a tournament in Stellenbosch from 6 to 9 October.
"These three girls are head to head and the outcome when they play each other is always different - ideal circumstances to create champions. They remind us of two Georgians, Donna Haycock and Marli van Heerden, both top players in the country, now with full tennis bursaries at American Universities.
"The three girls will represent Eden next year April at the SA schools week in Bloemfontein. Eden will have one of their strongest teams ever competing against 16 other provinces. The last two years Eden ended in 7th position and they are looking forward to improve on this position in 2017.
"Fourie invites everyone in George to support the local players in action on Friday and Saturday, 2 and 3 December, at the Eden Sportscentre Mini Masters in George.
The top 8 players in every age group are selected for the Mini Masters by calculating the results of the four Tennis SA tournaments hosted in Eden earlier this year. "The top 8 players qualify for the Mini Masters."
'We bring you the latest George, Garden Route news'