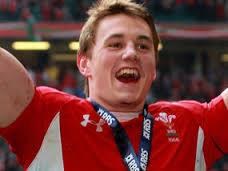 Jonathan Davies
INTERNATIONAL NEWS - Jonathan Davies returned from a shoulder injury on Tuesday as Wales coach Warren Gatland named a side showing nine changes from the team that struggled to see off Fiji last weekend for the clash with world champions New Zealand at Cardiff's Millennium Stadium on Saturday.

Davies, who has been out of action for three weeks, resumes his centre partnership with Jamie Roberts, in the only personnel change to the team beaten by Australia in Cardiff a fortnight ago.

Elsewhere in the back division Leigh Halfpenny has recovered from concussion to displace Liam Williams, while fly-half Dan Biggar (groin) and scrum-half Rhys Webb (neck) are also fit to return.

Up front, hooker Richard Hibbard also starts following his appearance for English Premiership side Gloucester last week that led to an angry response from Gatland after Wales had ruled him out of the Fiji match because of an ankle problem.

Hibbard was one of several forwards returning to Test action as Gatland selected the same pack that played in the 33-28 defeat by Australia, with captain Sam Warburton returning to the back row, locks Jake Ball and Alun Wyn Jones and prop Paul James all recalled for the clash with the All Blacks.

Prop Gethin Jenkins, who captained Wales to a 17-13 victory over Fiji, was ruled out with a hamstring strain.

Wales, in an error-strewn display, failed to score a point after half-time against the Pacific Islanders even though Fiji played the majority of the match a man down after prop Campese Ma'afu was first sin-binned and then sent off.

It was far from the ideal way to prepare for a match with the All Blacks, a team Wales have not beaten since 1953 with their losing run against New Zealand now standing at 25 successive Tests.

Wales's last victory over one of the southern hemisphere 'big three' of New Zealand, South Africa and Australia was a win against the Wallabies in 2008, with Gatland's men suffering 21 straight defeats combined by the trio.