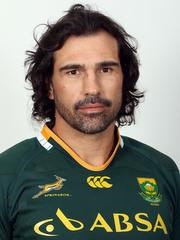 Victor Matfield
NATIONAL NEWS - Victor Matfield says it is never “meaningless” when you pull on a Springbok jersey as South Africa play Argentina for the third place spot at the Rugby World Cup at the Olympic Stadium this weekend.

The Boks’ 20-18 loss to New Zealand means they face the Pumas before heading home for some well-deserved rest and recuperation.

Matfield won’t be on the return flight as he will take up his latest challenge in England’s Premiership with Northampton Saints, but he wants Heyneke Meyer’s team to send out a strong message before then.

“It is never a meaningless game when you pull on the Springbok jersey,” he said. “We will have a good couple of practice sessions these next two days.

Matfield was part of a success-laden era for South Africa that featured the 2007 World Cup win and a series victory over the British and Irish Lions in 2009, which they followed up by winning the Tri-Nations title against Australia and New Zealand.

Now the challenge is on to the young group of Springboks to take their team forward starting on Friday and then in 2016 when Ireland visit for three tests ahead of The Rugby Championship.
Read more on Algoa FM.