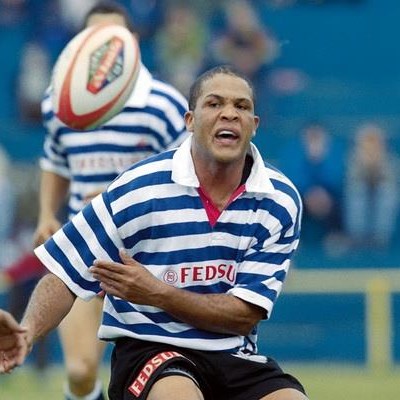 Tinus Linee
NATIONAL NEWS - Former Springbok Tinus Linee's motor neuron condition has stabilised thanks to his recent use of a ventilator, said his wife Diana on Monday.

Speaking at a Youth Day benefit in her husband's honour at the Daljosaphat Stadium between Wellington and Paarl, Diana Linee said Tinus's mind was "still positive" about the illness. But for the use of his hands, however, Linee, the 44-year-old former Stormers and Springbok centre, remained completely paralysed.

"He can only scratch his cheek,” she said.

"Tapping his knee means we need to straighten his legs. He uses signs for us to turn his pillow; he's got a signal for changing the station on the television. When he shows us his stomach we know he's getting cramps."

The introduction of a ventilator about two months ago meant Linee's condition has not worsened, but with 24-hour care, his medical expenses remained high.

The organisers' of Monday's event - Drakenstein Municipality, SA Rugby Legends, Boland and WP Rugby - were expecting to raise between R20 000 and R30 000 for the Linee benefit, with the day kicking off early through junior representative matches and culminating in the late afternoon with the much-awaited Boland legends versus Western Province legends on the main field.

With specially bottled red and white Tinus Linee wines as well as a lucky draw and rugby on the back fields of the complex throughout, the benefit day was fun-filled and successful.

One of the more touching moments of the afternoon came when the members of the Boland-affiliated Dennegeur rugby club, outside of Franschhoek, presented Diana with a cheque for R1000 as their contribution to his medical costs.

“Ons het ‘n klein ietsie ingesamel (We collected a little something),” said April Dube, their secretary. Dube added that the club had an account that got filled through annual fundraisers like braais and socials. Linee was a hero to many of their players and, as humble as their contribution was, they wanted to give something back.

Diana and Tinus both attended Nederberg Primary, the same primary school as Chester Williams and Pieter de Villiers. They then went their separate ways but were re-united by a common friend, former rugby player, Russell Roux.

Diana worked as liaison officer for the SA Police Services in Paarl East.