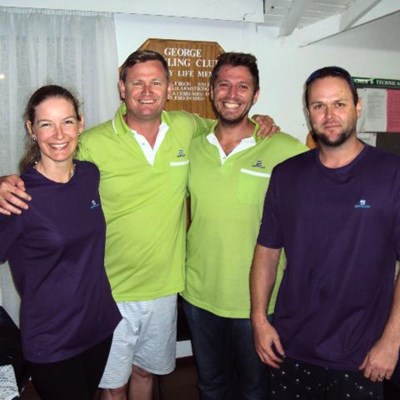 Team Sapcor is lying second on the log after round three of the Lew Geffin/Sotheby's Business Bowling Challenge at the George Bowling Club. From left: Janette Morgan, Donovan Gordon, Chris Kleynhans and Bertus Bekker.
GEORGE NEWS - Wilderness Whales caused a major upset at the Lew Geffin/Sotheby's Business Bowling Challenge by beating log leaders, York High, by a margin of 6 points difference last week at the George Bowling Club.
Wilderness Whales (36 points) are being chased by Sapcor (34) and Sotheby's (33). In the Plate Division, Eager Holdings is leading (24 points) followed by the Water Boys (23) and George High 1 (22).
Week three progressed in a much cooler environment.
Notwithstanding that, the bowlers continued in good spirit to show their skills with several teams reversing past stumbles to climb the ladder to higher placings in the Challenge.
However, it is still early days and any team can turn the tables and cause another major upset.
All teams are now well into the swing of things and are noticeably speeding up play to finish at earlier times. The final teams to depart Comay Green were those of Aranz Geo and Lancewood Gouda. For some reason a massive audience congregated to watch them play their final four ends with much banter passing between spectators and players.
Aranz Geo, who are the overall lagging team, were being hugely supported as underdogs. Despite this support they succumbed to defeat against Lancewood graciously, knowing that they had tried their best.
The remaining three games up to end of March will now be split with the stronger teams aiming for glory in the Challenge whilst the weaker teams will compete for the Plate.
The two winning teams for the evening were George High 1 (1st) and Sapcor (2nd).
'We bring you the latest George, Garden Route news'