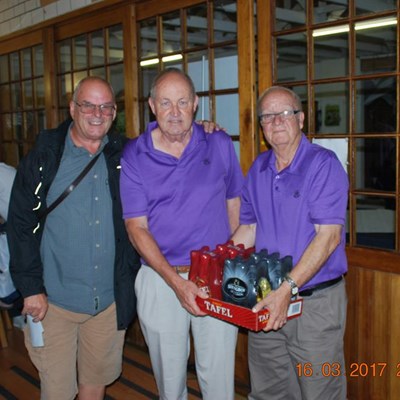 York High delivered one of the outstanding performances during the fourth round of the Business Bowling League at George Bowling Club last Thursday. The York team are, from left: Dave Ramsay, Tony Dingle and Koos van Tonder.
GEORGE NEWS - The Wilderness Whales (46 points) are still leading the Challenge Division of the Lew Geffin/Sotheby's Business Bowling League at George Bowling Club despite strong pressure from runner-up, Sapcor (44). The outstanding performers of the evening were York High (Challenge Division) and Barkley Oates (Plate Division) who both carried-off the evening's top prizes.
Sapcor faltered initially, but were able to reel the Whales in to keep them from rampaging ahead. Finwise (43) is in third position on 43 points followed by Supaquick (41) and Sapcor (38). The Whales will next play against Finwise, who are lying third on the Challenge log.
In the Plate Division George High 1 (34 points) succeeded in toppling Eager Holdings (33) from prime position, but only by a whisker.
York High and Barkley Oates reversed their poor shows of previous weeks to elevate themselves into higher positions, adding further excitement to the race for ultimate victory. Lying third in the Plate Division is Lancewood Edam (32), Barkley Oates (30) and Lancewood Cheddar (30).
There are still two rounds left.
Barkley Oates reversed their poor show in previous weeks to elevate themselves into fourth position in the Plate Division. From left are Dave Ramsay, Francois Ras, Chanel Jordan, Thabong Moshishi and Pierre van Eeden.
'We bring you the latest George, Garden Route news'