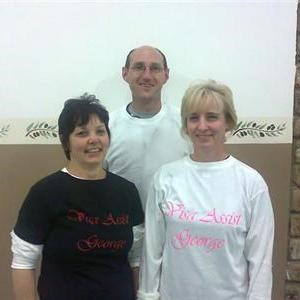 Three of the badminton team members are Heleen Fourie, Amanda Minnie and Pottie Potgieter wearing their white tops and black shirts sponsored by Visa Assist in George. Absent is Jaco le Grange and the sponsor Madeleine van der Bank.
GEORGE NEWS - In spite of no official hall in which to practise, George has entered a badminton team to participate in the upcoming Mossel Bay sports festival.

The team consists of Pottie Potgieter, Jaco Le Grange, Heleen Fourie and Amanda Minnie. The team will be taking part in the individual competition on Friday 28 September as well as the team competition on 29 September at the Kwanonqaba Indoor sports Centre.

Anyone who is in Mossel Bay this weekend is asked to support the local team. They would like to thank their sponsor, a new local business, Visa Assist for making it possible for them to compete. Anyone aware of an available hall is asked to contact Pottie on 074 178 2991. Currently George has no official badminton team.
Posted on: 05:00 Thu, 27 September 2012