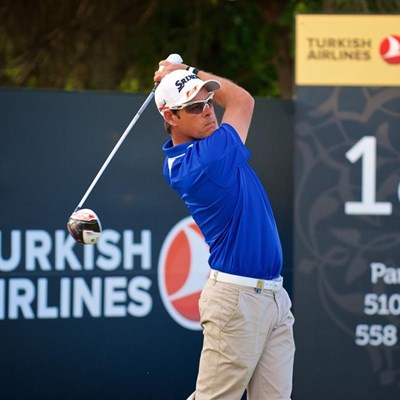 Jaco van Zyl in action; credit Turkish Airlines Open
NATIONAL NEWS - Frenchman Victor Dubuisson burst into tears after lifting the Turkish Airlines Open title for a second time in three years, but South Africa’s Jaco van Zyl walked off The Montgomerie Maxx Royal course feeling like a champion himself on Sunday.
“The only thing I’m sorry about is that I didn’t make the birdie putt to force a play-off, because it was a great final round tussle,” said Van Zyl after closing out a runner-up finish on 21-under-par 267 with a final round 67.
The 36-year-old Dainfern golfer not only banked a cheque worth just over R10-million and vaulted to 16th in the Race to Dubai, but will make a tidy jump in the official world golf rankings on Monday.
For someone who spent the majority of 2014 in bed after surgery in both knees, followed by a more surgery on his left knee after a screw snapped off, Van Zyl has enjoyed a dream season.
Small wonder he was beaming.
“When I stood on the first tee at the South African Open in January, I didn’t even know if I could play 18 holes, let alone make the cut,” he said.
“I came to Europe on a medical exemption. I just wanted to do well enough to keep my card, but I’ve gone way beyond any expectations I had for the season, so you can’t blame me for smiling. Hopefully I’ve done enough this year to crack the nod for the Nedbank Golf Challenge, because that would really put the seal on my best season ever.”
Van Zyl fired a blistering 61 in the first round, kept control with a 69 in round two and carded a 70 in round three to share the lead with Dubuisson.
The 13-time Sunshine Tour winner stayed in the mix with birdies at one, four, six and nine and was tied for the lead with Thailand’s Kiradech Aphibarnrat going into the back nine.
Dubuisson dropped back after a double bogey at four and bogey at seven, but re-joined the tussle with an eagle at 11 and birdie at 15.
Van Zyl birdied 13 and took the outright lead when he holed a trap-shot at the short 14th. Then the Frenchman birdied 17 to tie Van Zyl at 21 under, while Aphibarnrat stayed in close pursuit on 20 under.
“The difference at 18 was our tee shots,” Van Zyl said.
“Mine caught the upslope in the fairway and his the downslope and kicked on. I had 261 yards left to the pin and had to go with a three wood, but I left myself an impossible chip.
“Too hard and it would run well past the hole, too soft and it would catch the slope and wouldn’t get the pin on the bottom tier. Of course I was disappointed when the birdie putt just walked past the hole, but I still feel like a champion.
“I shot 73 in the last round and lost the French Open, but this time, I was right in there to the end. I came very close and that’s really positive for me.”
Van Zyl miss the second leg of the Final Series – the WGC-HSBC Champions – because his visa did not arrive in time, but will be competing in the BMW Masters and the season-finale DB World Tour Championship in Dubai.
Meanwhile fellow South African Thomas Aiken grabbed a share of four under with a final round 70, Charl Schwartzel closed with a 72 to finish on two under and Trevor Fisher Jnr finished a further stroke back in his Turkish Airlines Open debut after signing off with a 73.
ARTICLE: LALI STANDER
'We bring you the latest Garden Route, Klein-Karoo, Hessequa news'