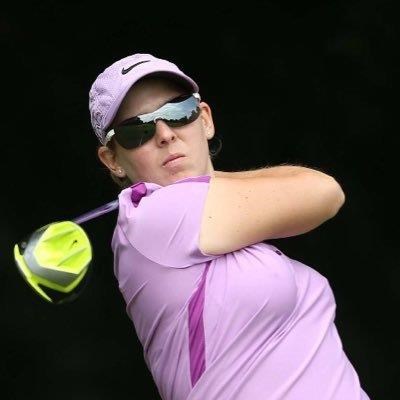 Ashleigh Simon. Image: twitter.com
NATIONAL NEWS - After she fired five birdies on the back nine at Royal Cape Golf Club for a five-under-par 69 in the first round of the Cape Town Ladies Open, Ashleigh Simon jokingly said she always rocks up on the back nine. But the four-time Sunshine Ladies Tour winner certainly brought her ‘back nine’ to the party in Thursday’s second round.

The 24-year-old Johannesburg pro negated a bogey at five with four birdies over the first nine holes and added another quartet of gains coming home and a six under 68 handed her the outright lead on 11-under-par 137.

Just a week ago, Simon carried a one-stroke lead into the final round of the Ladies Tshwane Open, but lost the title hunt to Monique Smit in a play-off. This time, she will sleep on a two shot cushion on Lee-Anne Pace, who shot 70 to finish at nine under.

Smit stayed in the mix with a 73, but the Southern Cape golfer lags five off the pace in joint third with Nora Angern from Switzerland and overnight leader Ivanna Samu, who posted rounds of 69 and 74.

After her opening round on Wednesday, Simon said a lot of her birdie putts burned the edges and she was pleased to get the job done.

“I had a pretty awesome day with the putter, despite three-putting for two bogeys and it was great to putt with some confidence again,” she said. “I dragged my irons a little, but I was solid off the tee and I hit my wedges really well. I gave myself a lot of chances and converted them for red numbers.”

Pace briefly joined Simon in the lead with birdies at 14 and 15, but Simon responded with her own pair at 13 and 14 to pull clear again.

“I hit it to five feet at 13 and chipped it to a foot at 14,” Simon said. “It’s always great to birdie 17 because it’s such a tough hole and was looking at a birdie at 18. Unfortunately I ran the first putt past the hole, missed the return putt from three feet and had to tap in for bogey.

“I really struggled with the putter in the Ladies Joburg Open and the Chase to the Investec Cup for Ladies, so to be able to turn it around and be in contention for two weeks running really boosts the confidence.”

Although Simon and Pace are quite a few shots ahead, Simon believes any of the players behind them can mount a final round challenge and cause an upset.

“Ivanna had a nervous start and never really settled down, but I think she could come back in the final round,” Simon said. “Nora had a great second round and Monique is always dangerous. Bertine (Strauss) had two eagles and four birdies today for a 69. She could be the dark horse on Friday is she keeps the bogeys off her card. Like we saw last week, it’s never over until the last putt drops.”