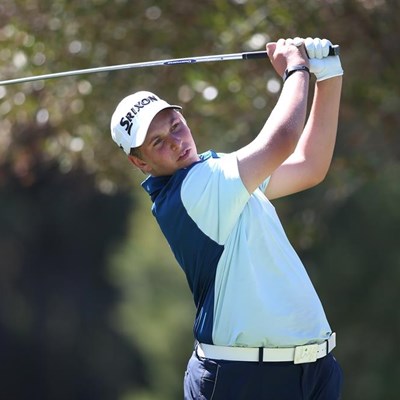 Ayden Senger. Photo: Shaun Roy / Image SA.
GOLF NEWS - Ayden Senger gave new meaning to that old saying that when you fall down, you should get right back up and keep walking when he fired a flawless 68 to take the first round lead in the Nomads SA Boys Under-17 Championship on Tuesday.
Coming down the final hole of the Montagu Course at Fancourt last Friday, the 15-year-old form Durbanville Golf Club was tied for the lead with Jayden Schaper, but his title bid drowned when his approach disappeared into the water guarding the island green.
Just two days after a finishing second to Schaper in the first Sunshine Tour Junior Series event, the Western Province junior was back at the top of the pile after firing four birdies at Rustenburg Golf Club.
Senger leads by one stroke from Southern Cape’s Martin Vorster, Angus Klintworth from Central Gauteng and Ekurhuleni pair Schaper and Casey Jarvis.
Schaper is chasing the ‘Grand Slam’, having won the Nomads SA Boys U-13 and U-15 titles and added the double at the Nomads SA Boys Under-19 Championship in April this year. The 16-year-old from Ebotse mixed two bogeys with five birdies for a 69 to stay in touch with Senger.
Vorster from the Louis Oosthuizen Junior Academy in Mossel Bay reeled in four birdies and an eagle at the par-five fourth, but slipped to joint second with bogeys at six, nine and 11. Thirteen-year-old Jarvis from State Mines also pencilled an eagle on his card at the par-five sixth, plus a pair of birdies to offset a lone drop at the ninth.
Klintworth is the only player in the top five in Rustenburg who is not inside the top 10 on the current Under-17 Rankings. The 16-year-old from Country Club Johannesburg was going along nicely over his front nine and moved to three under with a birdie at 10, but he stumbled with successive bogeys at 12 and 13. Klintworth rallied with back-to-back birdies at 15 and 16, though, to grab a seat on the bus at three under.
Alexander Pienaar from Gauteng North, Ekurhuleni’s Yurav Premlall and Reece Coleman from Eastern Province tied for sixth on two under, while Carl Mwale from Central Gauteng and Gauteng North’s Dean Sanders also finished under par in joint ninth.
Meanwhile the first ace of this year’s championship was recorded by Marcus Taylor from Central Gauteng. The Dainfern junior holed out at the seventh with a seven-iron from 175 metres.
First Round Scores (Top 20)
68 Ayden Senger
69 Martin Vorster; Jayden Schaper; Angus Klintworth; Casey Jarvis
70 Alexander Pienaar; Yurav Premlall; Reece Coleman
71 Carl Mwale; Dean Sanders
72 Ben van Wyk; Keyan Loubser; Tyran Snyders; Christiaan Burke; Kian Rose; Andre van Dyk
73 Kieron van Wyk; Nash de Klerk; Connor Williamson; Damian Osner; Christiaan Maas; Murad Hoosen; Calvin Maia; Barend Botha; Cole Stevens