Schaper and Dennis hit the front at Fancourt 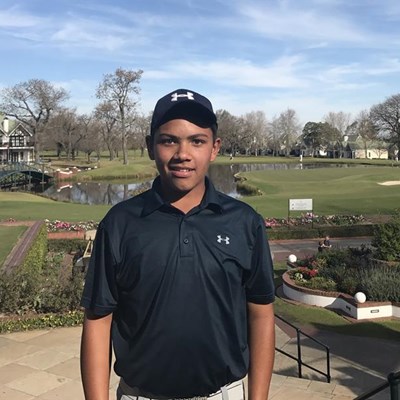 Matthew Dennis. Photo: David Younge / GolfRSA
GEORGE NEWS - South Africa’s top ranked junior Jayden Schaper and Matthew Dennis took the pole positions in the first Sunshine Tour Junior Series event as day one action wrapped up at Fancourt Country Club in George on Wednesday.
Schaper set the first round pace in the Dimension Data Junior Open with a sublime six-under-par 67 at the Links, while Dennis from Gauteng North carded a four under 68 at the Outeniqua Course to lead the Under-15 Challenge.

Jayden Schaper.  Photo:  David Younge / GolfRSA
Dimension Data Junior Open
Schaper became just the fourth player in South African amateur golf history to bag the elusive double in the Nomads SA Boys U-19 Championship in April and the 16-year-old GolfRSA National Squad player was in blistering form once again as he produced a masterclass at the demanding Gary Player-designed Links.
Off to the perfect start with back-to-back birdies, the Ekurhuleni golfer edged clear of the field with further gains at the fifth and eight holes. He stumbled briefly at the short 11th but made the most of his length off the tee to get back to four under with a birdie the par-five 16th.
The Ebotse golfer finished in style with an eagle three at the closing hole to open up a two shot lead on 15-year-old Ayden Senger from Durbanville and he finished four shots clear of Reece Haikney and Deon Germishuys, coming off a Bridge Fund Managers Junior Series win on Monday.
Senger birdied the second and the sixth holes and shared the top spot with Schaper after a birdie at 11. Another gain at 16 for a flawless 69 ensured that he stayed within striking distance.
Dimension Data Junior Open Under-15 Challenge
Over at the Outeniqua Course, the lead changed hands with Rorisang Nkosi from Pecanwood, Kirkwood’s Malan Potgieter, Hannes Strooh from Randfontein and Ruimsig’s Brandon Weir all taking a turn at the top.
But it was Dennis who had the last say.
Making the most of the sunny conditions and fast greens, he dipped two under par with birdies at five and nine. He gave back a shot at the 10th, but finished with a trio of birdies to lead at four under.
The 13-year-old from Centurion Country Club was nine when he took up golf and he is coached by former Sunshine Tour winner Nico van Rensburg. The Cornwall Hill College scholar won the Atlantic Beach Junior Club Championships in 2015 and repeated the feat at the Centurion Country Club Junior Championship this year. In 2016, he claimed a runner-up finish in the Malaysia Junior Championship at Tanjong Puteri Golf Resort.
Dennis leads by two from Ekurhuleni’s Nash de Klerk, who also birdied two of the last three holes to move to second with a two-under-par 70.
Nkosi carded a one under 71 to finish alone in third.
Central Gauteng’s Amilkar Bhana – the 2017 Gowrie SA U-15 Challenge title holder – moved within four of the first round pacesetter with a birdie-birdie finish and joined Jordan Duminy from Southern Cape and Gauteng North’s Christaan Maas in a tie for fourth at even par.