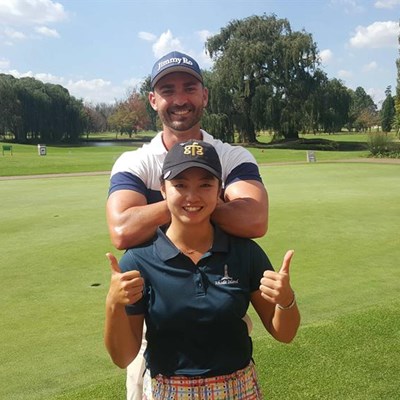 Anton Haig and Carrie Park; credit Graeme Francis
NATIONAL NEWS - A pure shot at the first hole sent Anton Haig on his way to a maiden IGT Tour victory in the ERPM Challenge, but Carrie Park also felt like a winner after she rolled in a par-putt at the final hole to finish second two weeks ago.
The pint-sized Park fired a 63 in the first round to tie Haig for the lead at ERPM Golf Club.
She shot 69 in the second round to keep pace with the former European Tour winner and closed with a 66 to finish four shots behind Haig.
Haig was so impressed with the 19-year-old Park that he asked about investing in her.
“Carrie is one helluva golfer and she is only 19,” Haig said. “She is straight, she’s compact, and accurate and she has a really good sense of where she is going with her shots.
“I loved playing with her, because she pushed me to lift my own game. She has all the marks of a champion and I reckon she will start paying great dividends in a few years,”
Haig will miss this week’s CMR Challenge to compete in the Investec Royal Swazi Open in Swaziland, but Park will be hunting more success on the IGT Tour as she prepares for her Asian Ladies Golf Tour debut in June.
“I watched Lee-Anne (Pace) and Bertine (Strauss) on the Ladies Sunshine Tour and I was amazed at how good their all-round game is,” said the GFG Academy player.
“You put so many hours into your game. You hit hundreds of shots and chips and putts, but it is so tough to get every aspect of the game to work together over three rounds in a tournament. But I did it at ERPM.
“I had three days of incredibly driving, great irons and solid putting and it felt wonderful to have everything coming together like that. I owe it to my coach Graeme Francis, who has been trying to help me get more distance so I can be more competitive.
“We have been working on my left hip rotation for a long time, but suddenly before ERPM I finally tweaked. I am hitting the ball at least 30 meters further and it puts me in a much better position to attack the pins with the short irons and wedges.
“Isn’t it funny how something so small can build your confidence? I felt much more in control at ERPM and I had a lot more confidence over my approach shots and putts.”
Park learned to play golf at a driving range in native South Korea at the age of 12, but after her father visited South Africa in 2012, he enrolled Park at Southdowns College in Centurion. She joined the GFG Academy, began competing through the Gauteng North Golf Union and within a year, she dominated the local women’s amateur circuit.
Shortly after she rose to the number one spot in the WGSA rankings, Park captured the 2014 Sanlam SA Amateur Women’s Stroke Play title and last year she won the Sanlam SA Women’s Amateur Championship to join the likes of Ashleigh Simon, Kim Williams and Swaziland’s Nobuhle Dlamini as a ‘double’ winner.
As one of the first women to compete on the IGT Tour, Park has made it a habit to upstage the pros and leading amateurs on the country’s premier development Tour.
She campaigned full-time last year to prepare for her debut in the SA Women’s Open in December, where she cashed in on a third place finish. Five more top 10 finishes secured her spot in the Chase to the Investec Cup for Ladies Final in March, where she placed eighth overall.
“When I first started to play here in South Africa, Lee-Anne, Bertine, Ashleigh and Stacy Bregman were my idols and it was really cool to qualify with them,” Park said. “I remember in my first tournament - the Sanlam SA Women’s Amateur –Bertine beat me hands-down. It was such an honour to play with her in the first two rounds at Millvale. It meant a huge deal to me to know that I am good enough to compete against the best in the South Africa.”
Now Park is looking ahead at her next big test.
“Monique (Smit) loves playing on the Ladies Asian Golf Tour and she said I should give it a try,” Park said. “My entry for the Hong Kong Open was accepted, so we leave in early June. The next couple weeks are really important for my preparation and I’m excited to see how I will do, but any international experience will be good.
“I hope to get the funding together so I can join a few of the other South African girls at the First Stage of the LPGA Tour School. It’s important to set goals so you know what you are.
The CMR Challenge will be played at CMR Golf Club from 3-5 May.
ARTICLE: LALI STANDER
'We bring you the latest Garden Route, Klein Karoo, Hessequa news