Rory McIlroy on the 17th green during a practice round on Wednesday -- can he end the recent American dominance of golf's majors?

GOLF NEWS - Rory McIlroy admits it is going to take something special to end the recent dominance of the majors by American golfers as the British Open teed off at Carnoustie in Scotland on Thursday.

Now 29, McIlroy is aiming to end a four-year drought without a major victory but the trend is towards the strong contingent from the United States maintaining a firm grip on the sport's biggest prizes.

The last five majors - and seven of the last nine - have been won by Americans, including Jordan Spieth's victory at Royal Birkdale 12 months ago and Brooks Koepka's successful recent defence of the US Open.

"There's so many great players, and it just seems like, at this point in time, they're all playing really good golf at the same time," said McIlroy, the 2014 Open champion, on Wednesday.

"They're some of the best players in the world and deservedly so, and they're going to take some beating," added McIlroy, who made his major debut as an amateur here 11 years ago.

Woods back in contention
American strength in depth is all the more striking with the Ryder Cup coming up in France at the end of September, and with Tiger Woods in Scotland looking like a genuine contender to finally triumph at a major again, a decade after he won his 14th at the US Open.

Woods, 42, is a three-time winner of the Claret Jug and he believes that the unique conditions of links golf could offer him his best chance to add to his haul.

"As far as long term, certainly, I would say yes because of the fact that you don't have to be long to play on a links style golf course," said Woods, who is not getting any younger but takes inspiration from the veteran Tom Watson's near miss at Turnberry in 2009. 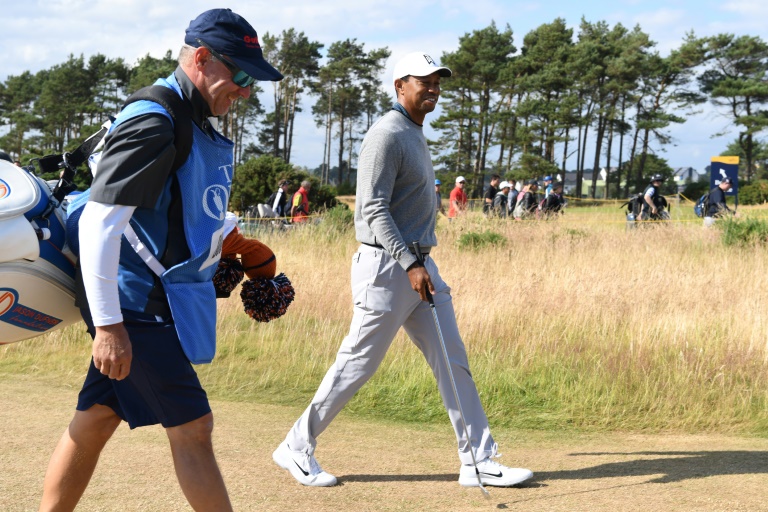 Tiger Woods with Jason Dufner's caddie during a practice round on Wednesday.

"Look what Tom did at Turnberry at 59, I believe he was. So it's possible. Distance becomes a moot point on a links style golf course. But creativity plays such an important role."

Woods, who finished tied 32nd at this year's Masters and missed the cut at the US Open, will be one of the last players to tee off in the first round, going out at 3:21pm (1421 GMT) in a group with Japan's Hideki Matsuyama and Scotland's Russell Knox.

McIlroy, meanwhile, starts his round at 12:53pm. World number one Dustin Johnson, another of the US contenders, goes out in the group behind McIlroy.

"I've had four weeks off, so I've had a lot of rest. I feel good about the game," he said as he targets the $1.89 million first prize.

After surviving a final-day wobble to beat compatriot Matt Kuchar by three strokes last year, Spieth begins his defence of the Claret Jug at 9:58am, going out with England's Justin Rose and Kiradech Aphibarnrat of Thailand. 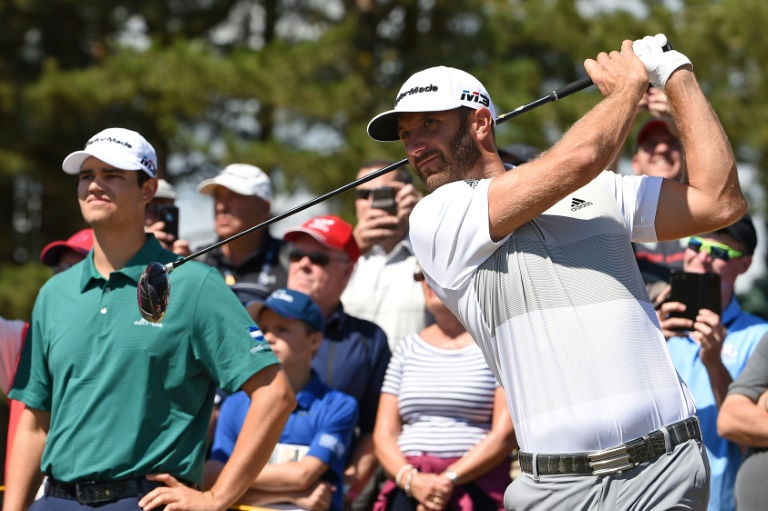 World number one Dustin Johnson is the favourite with bookmakers.

Spieth is looking to emulate Padraig Harrington, the last man to win The Open in back-to-back years - the Irishman retained the trophy in 2008 having beaten Sergio Garcia in a play-off in 2007, the last Open at Carnoustie.

The notorious course is one of the very toughest to host The Open, all the more so when the wind blows in off the North Sea.

In 1999, the year Frenchman Jean Van de Velde famously blew his hopes of victory as he tried to play out of the Barry Burn in front of the 18th green, the weather added an extra layer of difficulty. Paul Lawrie won the Claret Jug despite finishing six over par.

Conditions may be rather more benign this week, as Scotland's east coast has enjoyed a prolonged summer heatwave that has turned the fairways brown.

"The way the golf course is set at the moment, as the conditions are, anybody who plays in this tournament could win," remarked Gary Player, the South African, now aged 82, who won here in 1968.

Veteran Scotsman Sandy Lyle, Open champion in 1985, had the honour of playing the first tee shot at 6:35am.