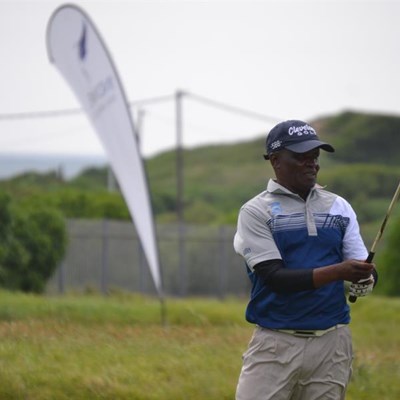 David Konzani from Humewood Golf Club; credit Greg de Doncker.
NATIONAL NEWS - The high winds and gusting conditions at Humewood Golf Club did little to deter David Konzani as he continued to stamp his dominance on the Indwe Risk Services SA Senior Amateur Stroke Play Championship on Wednesday.
The diminutive 55-year-old from Port Elizabeth wore the steely look of a gladiator as he fired a second round two under 70 in testing conditions at the revered links to pull away from the chasing pack and he will sleep on a cosy seven shot cushion at seven-under-par 137.
Durban Country Club’s Kevin Curren held on to second with a 75, while Brian Mampies from Parow Golf Club moved into third on four over with a 76.
Konzani is marching purposefully towards victory in the senior amateur circuit’s flagship event.
“The wind was gusting up to 40 kilometres an hour when we teed off,” said Konzani, whose best season since joining the senior circuit in 2010 has seen him rise to second in the rankings.
“When the wind blows like that at Humewood, you can’t take the course on. You have to take a conservative approach and play for par. Par is king.”
Konzani had bogeys at 12 and 18 and lone birdie at 16 to turn one under.
“I short-sided myself in the greenside bunker at 12 and three-putted 18,” he said. “I was in the greenside bunker at 16, too, but I splashed out to 15 feet and boxed the birdie putt.”
After five straight pars, the Port Elizabeth senior went on a birdie binge with three successive gains from six before closing with par at the par-four ninth.
“I hit it to close at four, but it was a very quick downhill putt,” he said. “I just lagged it close and tapped in for par. I had a chance at five, too, but by this time the wind was pumping up to 50 kilometres an hour, so I just put it close and tapped in for par.
“I hit it to four feet at six and made the birdie putt and two-putted for birdie at seven. The eighth was into a strong wind. I hit driver, two-iron but I finished short of the green. I wanted to putt it close and it dropped for birdie. I don’t think anyone else made birdie at that hole today.”
Pleased to be so far in front, Konzani said complacency at this stage would be a huge mistake.
“We still have 36 holes to go and, with a course like Humewood, if the wind dies, anyone can shoot the lights out,” he said.
“I’ll stick to my conservative approach and try to put more distance between myself and the field. I’m not going to start chasing birdies now; it’s not the time to try and fancy.”
AW Glover from Port Elizabeth Golf Club and Wingate Park’s Adrian Kriel finished a distant fourth at five over 149 after respective rounds of 79 and 80.
Like Kriel, Ekurhuleni’s Ramon Rahme was also in the last couple of groups at back of the field that bore the brunt of the worsening weather conditions.
The Glendower senior signed for a 76 to join the four-man bus at six over with Norman Phillips (79) from Port Elizabeth Golf Club, Somerset West’s Tim Hewan (77), Tanglewood’s Alex Pillay (75) and third ranked Mzuyanda Zingela (77) from Uitenhage Golf Club.
Defending champion Mellette Hendrikse from Akasia Country Club almost certainly ended his bid for a third Indwe Risk Services SA Senior Amateur Stroke Play Championship title after slipping to joint 21st on 10 over 154 with a second round 82.
The cut was set at 17-over-par, leaving 66 players to contest the final two rounds.