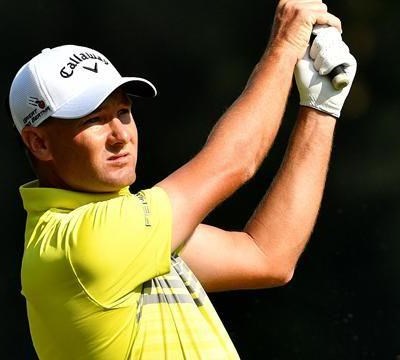 The world number 480 defeated Spanish Ryder Cup star Rafa Cabrera Bello – ranked 447 places above him – on the 18th after Brazel agonisingly missed a birdie on the 17th.

Brazel, 37, whose partner died suddenly from bacterial meningitis in 2009, cried as he dedicated the improbable victory to his family, saying: "This is for you guys."

Asked if he had a message for his loved ones, his voice again cracked as he added: "I'd just say thanks for the support over many years.

Brazel had never won a four-round tournament before Sunday, and until he gained his Asian Tour card in 2013 was grinding out results on lower-level circuits such as the Queensland Sunshine Tour in Australia.

He admitted he was still in shock from his giant-killing total of 267, which also saw off a challenge from US Masters champion Danny Willett, who had held the lead at one point but ended in sixth place on 271.
"I certainly didn't expect to be in here this afternoon but I'm thoroughly impressed that I am!" he said as he faced the media.
"I was supposed to be taking a 9.30 flight back to Australia tonight but I don't think I'll be making that!"

He had earlier said winning the $2 million Hong Kong Open would "mean the world" to him – and his fellow Australian golfers including Scott Hend mobbed him on the final green to douse him in champagne.

Cabrera Bello, who has not won on the European Tour since the 2012 Dubai Desert Classic, had to settle for second place, finishing with a round of 268.
Read more on SuperSport