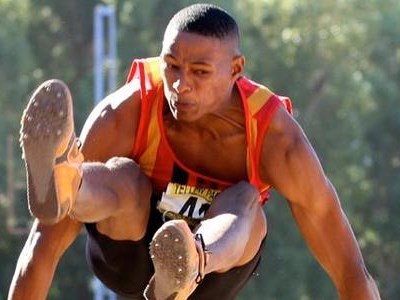 Ruswahl Samaai. Image: twitter.com
NATIONAL NEWS - The Cape Town-born Ruswahl Samaai equalled the SA indoor record on Sunday, producing a leap of 8.18m in the men’s long jump final and narrowly missing out on a medal at the IAAF World Indoor Championships in Portland, Oregon.

Making his indoor debut, Samaai took the early lead with an 8.14m effort from his first attempt, and he went four centimetres further in the second round to match the national mark set by former world indoor champion Khotso Mokoena in Paris in February 2007.

After going over eight metres again with his third leap (8.03m), Samaai did not register jumps in the fourth or fifth rounds.

With only the top four men receiving a sixth attempt, he bowed out, taking fifth position.

American Marquis Dendy secured the gold medal with a best leap of 8.26cm, just one centimetre ahead of Australian Fabrice Lapierre.

Changzhou Huang of China grabbed bronze with a leap of 8.21m, as Samaai fell just three centimetres short of a place on the podium.

“I felt so good. It’s not the result I wanted but I’m going all out to make myself and my country proud,” the Commonwealth Games bronze medallist told the allathletics.co.za website, adding, he will now turn his attention towards the outdoor season.

“There’s still lots of work that needs to be done, but I’ll get there.”

Earlier at the four-day championships, which came to a close on Sunday evening (SA time), Antonio Alkana had clocked 7.76 seconds in the heats of the men’s 60m hurdles event, in his maiden indoor race.
Read more on The Citizen.