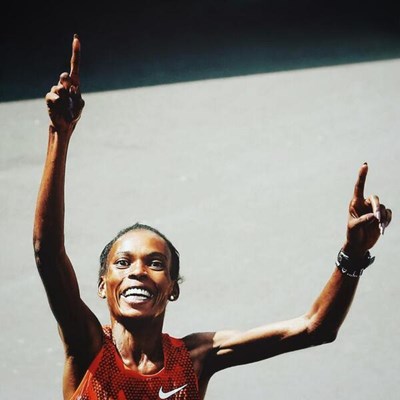 The 35-year-old three-time Boston marathon winner tested positive for the banned blood booster EPO, in an out of competition test in September 2014, and was given a two-year sanction by Athletics Kenya.

But her return depends on the outcome of her appeal to the Court of Arbitration for Sport (CAS), which is set to rule on her case on October 26, after the IAAF requested that the ban be doubled to four years.

"I have returned to serious training with the hope that I will return to the marathon soon," Jeptoo told AFP from her hometown of Eldoret.

"I am optimistic my appeal to CAS will go through," said Jeptoo, who decided to launch her own appeal with the sport's highest court after her lawyer withdrew from the case in July.

Athletics Kenya also opted out of the case despite having previously announced its attendance in the arbitration appeal hearing in Lausanne, Switzerland.

Following her ban, Jeptoo's result as the winner of the 2014 Chicago marathon was disqualified, and she is also likely to forfeit the 2013-2014 World Marathon Majors (WMM) title to fellow Kenyan Edna Kiplagat.
Source: SuperSport.