Armed members of the National Guard were omnipresent, having spent the night on the ground in the building's famed central rotunda and elsewhere in its halls.

Speaker of the House Nancy Pelosi gavels during the chamber's vote on the impeachment of President Donald Trump on 13 January 2021.

POLITICAL NEWS - There was deep silence on the House floor as the gavel struck Wednesday heralding the second impeachment of US President Donald Trump.

With hands clasped atop a lectern on which rested the results of the chamber's historic vote, Speaker Nancy Pelosi announced the charges, making Trump the only president in US history to be impeached twice, this time for "incitement of insurrection" against the Capitol.

During the document's subsequent sober signing, the mood was a far cry from Trump's first impeachment, when Pelosi signed the document with multiple pens, distributing them to elected Democrats with a smile.

As if to emphasize the occasion's solemnity, Pelosi, who is known for her bright suits, opted for the same dark outfit she wore for Trump's first impeachment on 18 December 2019 - a look equally if not more befitting a funeral.

The 45th president, she told her colleagues, had incited "insurrection" and "armed rebellion" in the January 6 attack on the US Capitol. Trump, she emphasized, "must go, he is a clear and present danger to the nation that we all love."

The violence left five people dead and shook the nation to its core. 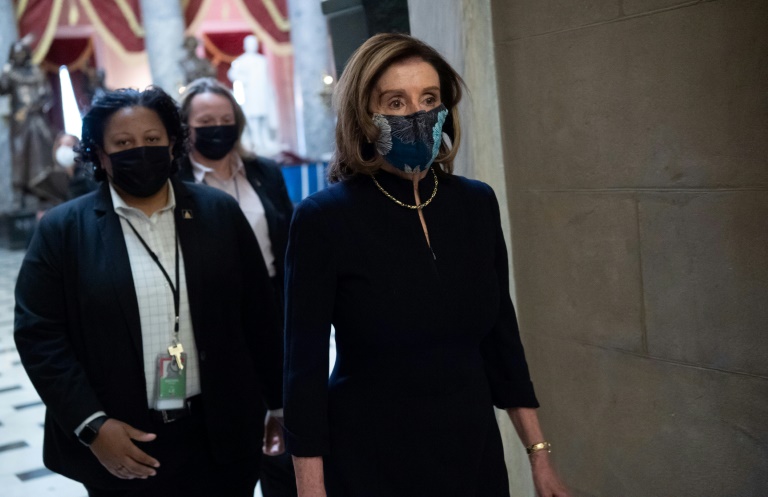 House Speaker Nancy Pelosi, who is known for her suits' bright colors, opted for the same dark outfit she wore for President Donald Trump's first impeachment.

It was in the same chamber, exactly one week prior, that lawmakers were forced to take shelter, lying on the ground as pro-Trump demonstrators tried to force their way in through barricaded doors.

Seven days later, the scene was much calmer but still markedly abnormal: A perceptible hush permeated the usually bustling marbled corridors, where statues and paintings reference the nation's storied past.

Armed members of the National Guard were omnipresent, having spent the night on the ground in the building's famed central rotunda and elsewhere in its halls.

In addition to their indoor patrol was a massive outdoor presence on and surrounding the Capitol's grounds, where armored vehicles and concrete barriers framed the vast area surrounding "the people's house," as the building is known.

The coronavirus pandemic has only added an additional unusual element, with fewer lawmakers gathered on the House floor and the building's usual flurry of activity long stifled since before the attack.

In the front row as Pelosi announced the vote's results was Democrat Lisa Blunt Rochester standing solemn alongside other elected officials. During the siege, she prayed aloud while taking refuge in the gallery overlooking the House floor, as armed guards tried to prevent Trump supporters from entering. 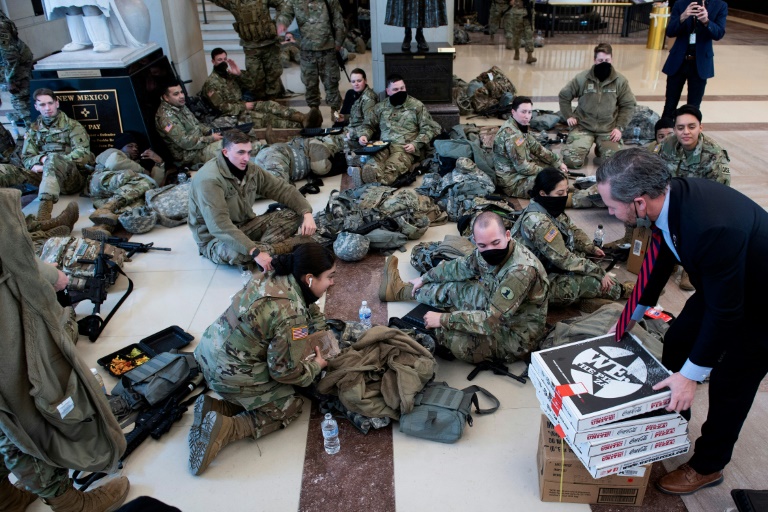 Members of the National Guard receive food in the Capitol Visitors Center on 13 January 2021 ahead of the House vote impeaching US President Donald Trump.

That day's terrifying memory hung in the air during Wednesday's proceedings, but didn't stop biting exchanges and even boos from punctuating lawmakers' emotional speeches, as Trump's staunchest supporters and Democrats butted heads.

Blame game
When Republican Matt Gaetz of Florida, a stalwart Trump ally, told the chamber that "the left in America has incited far more political violence than the right," outcries were heard from lawmakers, a rarity on the House floor.

He concluded with a reference to demonstrations against racism and police violence that have rocked the US in recent months, accusing Democrats of stoking rebellion first: "Some have cited the metaphor that the president lit the flame. Well, they lit actual flames. Actual fires," he told the House. 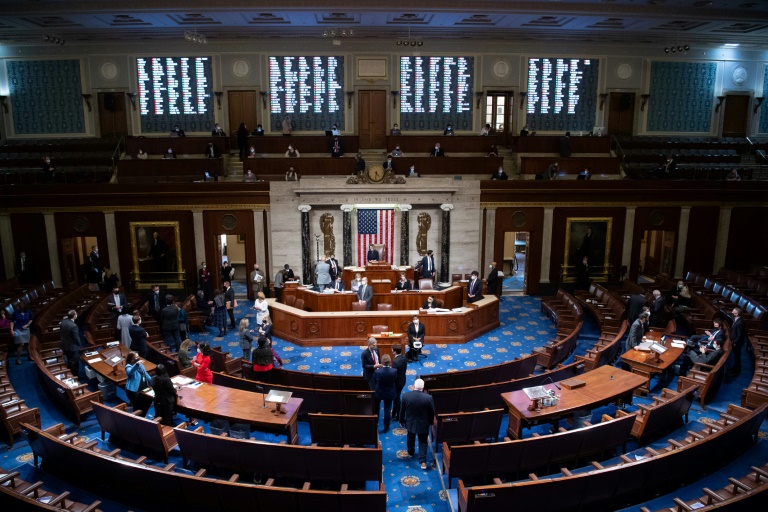 In the corridors, congressional aides, Capitol police, cafeteria employees and journalists exchanged knowing looks, tacit acknowledgements of the ordeal they through which they just lived.

"There's nothing pleasant, or frivolous about the seriousness of what's happening. We are still living in the immediate aftermath of insurrection against our government and against this Capitol," Democrat Adam Schiff, who led the Democrats' first impeachment proceedings against Trump.

"But I have a very solid conviction that this is the right remedy... we are at a pivot point, and we can nudge the country back on the right path," the California lawmaker said.