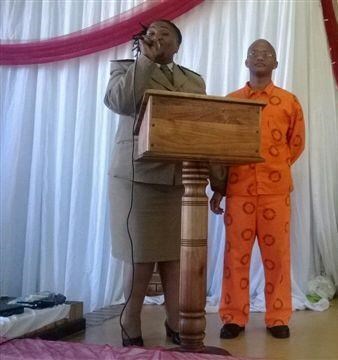 Accomponied by a commissioner of the Department of Correctional Services, Ndileka Booi (left), convicted rapist Francois Coetzee spoke at a prayer session for the final Matric examinations held at the Khayalethu Community Hall on Sunday, October 19, 2014, days before he was released on parole.
NATIONAL NEWS - The convicted violent criminal and sex offender Francois Coetzee (41) of Knysna is a free man.

A Correctional Services spokesperson, Carla Williams confirmed on Monday, September 14 that Coetzee had been released on his sentence expiry date "which means he has served the entire sentence and is a free man".

Coetzee, who had been sentenced to 21 years and six months behind bars after being found guilty of attempted rape, housebreaking with intention to steal and three charges of theft, attempted murder, indecent assault and assault, was released from the Knysna Correctional Services on Thursday, September 10.

On August 6, 1995 Coetzee violently attacked Alix Carmichele who was alone at a friend's house at Noetzie.
Read more on our sister publication, Knysna-Plett Herald.