This man has sculpted a tiny Webb Ellis Cup, and he wants the Boks to have it

Willard Wigan’s extraordinary creations can only be fully appreciated under a microscope.

NATIONAL NEWS - Willard Wigan, the creator of the world’s smallest handmade sculptures in history, has created a solid gold, hand-carved and engraved Webb Ellis Cup within the eye of a tiny sewing needle.

His sculptures are almost invisible to the human eye. Their beauty and detail only becoming appreciated under the lens of a microscope.

The miniature Rugby World Cup was made by Willard to celebrate the tournament won by South Africa, and he says it is looking for a new home, perhaps to be exhibited or owned by the World Cup winners.

Willard said it would be really exciting for him if the sculpture could become a part of South Africa’s historic win.

He says his life story took him from childhood torment to adult fulfilment through his tiny artworks. He once accidentally inhaled one of them, and lost another between his fingerprints.

His micro-sculptures have amazed and fascinated both art lovers and scientists – with many people baffled about how he produces such tiny masterpieces on the molecular level.

He has exhibited all over the world and collaborated with watchmakers, jewellers and other artists. He has two Guinness World Records and received an MBE and an honorary doctorate in recognition of his contribution to art and sculpture. He says his main aim is to infect people with happiness and wonder.

At school he was an example of educational failure and laziness, but was later able to create his miniature world, where his autism and dyslexia became his assets, not burdens. After his exceptional gift was discovered, his unique creations are now collectors’ items. 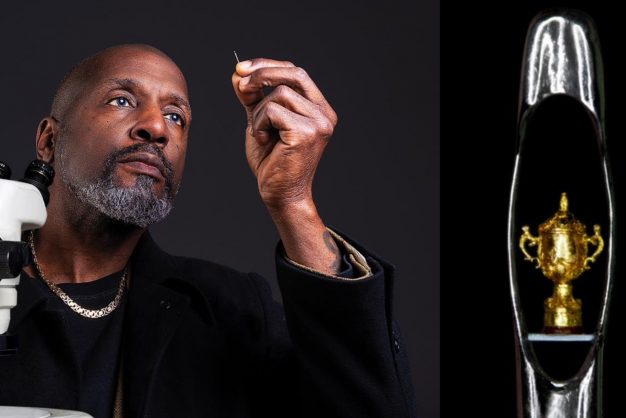 Willard Wigan, left, with his Webb Ellis Cup sculpture in the eye of a sewing needle (right).