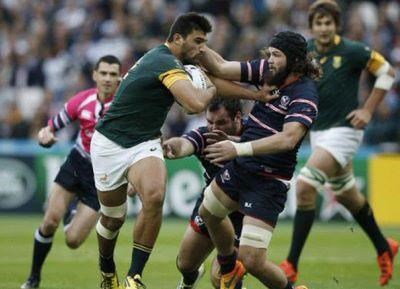 Power play Damian de Allende shows his skills to storm over for the opening try in the Springboks vs USA game on 7 October, 2015. Picture: Twitter @rugbyworldcup.
NATIONAL NEWS - The Springboks have booked their place in the quarterfinal of the Rugby World Cup with an emphatic 64-0 win over the United States of America.

The win sees the Boks top Pool B despite the loss to Japan in their opening fixture.

Captain Fourie du Preez praised the tenacity his team has shown in fighting back from what would have been a tournament-ending defeat, losing to japan in their opener.

“I’m very satisfied. Impossible is a funny word. A few weeks back I wasn’t sure if I was still going to play rugby and next thing I was the Springbok captain,” says du Preez.

Habana had high praise for his team last night, saying the Boks’ fortunes at the World Cup have started to turn.
Read more on Eyewitness News.