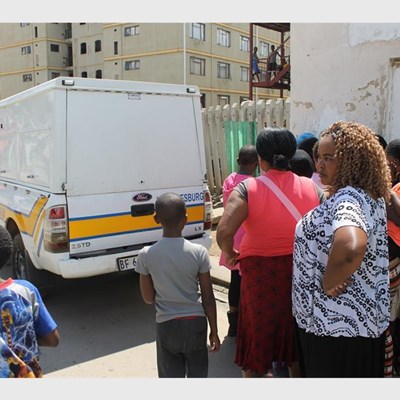 Forensic unit vehicle which collected the foetus with the public watching
NATIONAL NEWS - A foetus was discovered in a plastic bag on the morning of 27 March in Alex.

The discovery was second for the day in Alex, after an earlier foetus was found on 13th Avenue. The first foetus was suspected to have popped out with water from a damaged water and sewage main due to rain in the area.

The discovery was made by a rubbish collector foraging behind public toilets for discarded items to sell at corner 13th and Josias Madzunya avenues. Police were on site to maintain order on residents, who were restless and eager to have sight of the foetus. The foetus was collected by the state forensic unit.

Opting to remain anonymous some of them said after the alert by the collector, they went with him to report the incident at the police station. Some expressed horror at the discovery saying it would dent the image of the community. Onlookers said nothing was retrievable of the moral values lost on the respect for life, irrespective of one’s personal challenges. They asked teenagers and women struggling to cope with unwanted pregnancies to seek advice from elders, counselors, churches and the police. The discovery also happened days after the Department of Basic Education disclosed that 20 000 school children fell pregnant last year with the highest number in Gauteng followed by the Eastern Cape.

Also, early this year councillor Chris Mabunda said council had discontinued the use of skip bins in the township after cleaning crews were reported to be struggling to cope with undesirable items they found in them including foetus.

Foetus discovered at corner 13th and Josias Madzunya avenues.
(Picture has been blurred due to the sensitive nature of the image)
Read the full story on Caxton publication Alex News.