Roadworks near Grahamstown lead to discovery of fossils 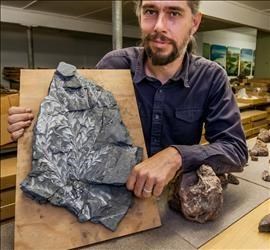 According to Dr. Gess, the plant and invertebrate fossil discoveries are from ancient open river mouth ecosystems. "It differs from the fossil discoveries of the closed lagoon ecosystem of Waterloo Farm, an important South African palaeontological heritage site of the late Devonian period which is 20 kilometres away from the current excavation site where SANRAL is working.
"The discovery is significant as paleontological research and scholarship on marine ecosystems of the Devonian period was primarily anchored in the fossil discoveries of Waterloo Farm. Now, we are able to trace a much broader picture of life along an ancient coastline through the discovery of new plant and invertebrate species."
Read more on Algoa FM.