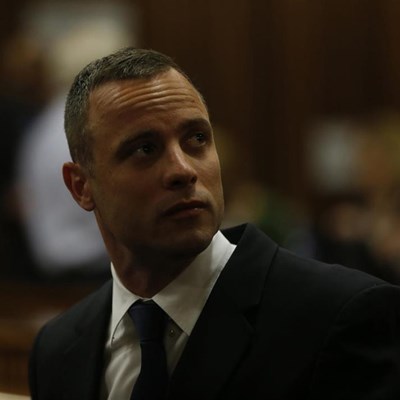 "From the moment I saw him, I saw a heartbroken man who was suffering emotionally. I saw a man who was in mourning and was sorry for the loss," said Yvette van Schalkwyk.

"He spoke to me about the plans they had with Reeva for the future and about her parents and the suffering of her family."

She said she had been upset by media reports suggesting that Pistorius was not sincere in his apologies and was faking tears and emotions.

He said her evidence was irrelevant, but he was overruled by Judge Thokozile Masipa.

Van Schalkwyk said she met Pistorius for the first time on February 15 in police cells, a day after the paralympian shot Steenkamp.

Under cross-examination by Nel, Van Schalkwyk said she had never dealt with other accused people in a "family murder case".

Earlier, Professor Christina Lundgren, head of anaesthesiology at Wits University, told the court it was problematic to ascertain the time of a deceased person's last meal based on gastric emptying and the time of death.

Lundgren said she could not support the State's assertion that Steenkamp ate about two hours prior to her death.

She referred the court to different literature suggesting that it would be speculative to gauge the time of eating and emptying of gastric contents of a deceased person.

Lundgren was called by Pistorius's defence to give expert evidence on factors which influence gastric emptying.

The anaesthetist said it was not proven that a stomach emptied after four hours. She said there was consensus on gastric emptying requiring a minimum of six hours after eating.

"About 10 percent of a low fat meal would remain in the stomach after four hours," she said.

She said the topic of gastric emptying was "not an exact science".

She said it had also been said Steenkamp did some yoga before going to bed, which could also have delayed gastric emptying.

She said the fact that Steenkamp was pre-menopausal could also have played a part.

In March, Professor Gert Saayman, who performed the post-mortem on Steenkamp, said the model's bladder would have been empty had she gone to the toilet between 30 minutes to an hour before her death.

He said she could have eaten her last meal about two hours before her death. He took pains to qualify this statement by saying that estimating the time of gastric emptying was not an exact science and that he was relying on his years of experience and studying.

In April, Pistorius was unable to explain why there was still food in Steenkamp's stomach when she died on the morning of February 14, 2013.

At the time, Nel suggested Steenkamp "must have eaten within two hours of her death".

Pistorius insisted the couple ate around 7pm on February 13 and went to bed soon after. Steenkamp was killed at around 3am the following morning.

Pistorius has claimed he thought Steenkamp was an intruder when he shot her dead in his Pretoria home. He has been charged with murder.

Pistorius is also charged with three contraventions of the Firearms Control Act -- one of illegal possession of ammunition and two of discharging a firearm in public.

He has denied guilt on all charges.