NATIONAL NEWS - There are fewer than 4,000 tigers left in the wild, 95% fewer than there were since the start of the 20th Century.

If tigers become extinct, the blame rests squarely on the shoulders of human beings. At this rate, there may not be many World Tiger Day celebrations left.

The sinister business of breeding and trading tigers has been a serious concern for animal rights groups for many years. Despite this, these illegal activities still take place throughout South Africa, with many citizens boasting about owning a tiger cub in their backyard.

Unfortunately for tigers, who come from Asia, they are considered an exotic species in South Africa, which means there are no laws protecting them.

The amount of tigers in South Africa is also a mystery, with very little public information on the extent of tiger trade in the country, said Blood Lions campaign manager, Dr Louise de Waal.

This means that no one knows how many tigers, and other big cats such as cheetahs, jaguars, pumas and leopards are currently kept in the country’s 350 big cat captive breeding facilities, often in substandard conditions.

De Waal estimates that around 60 breeding facilities in South Africa contain between 1,000 and 1,500 tigers, but accurate figures remain unknown.

She explained that according to the Convention on International Trade in Endangered Species (CITES), all facilities breeding Appendix I animals must be registered.

“However, South Africa does not have a single facility listed with CITES for any Asian big cats, despite the fact that there are many places that are breeding them in South Africa.

“Many of these tigers are, like their African cousins, slaughtered for their body parts, (illegally) exported often in consignments labelled as lion bones, or sold legally through CITES as live animals to South East Asia with no clear insight of their final destination or fate.”

Environmental Investigation Agency campaign leader for tigers and wildlife crime, Debbie Banks, explained that almost every part of a tiger is sold in Asia – from the skin used for home decor to bones used in Traditional Chinese Medicine to treat arthritis. Tiger bones are also used to make wine and cake, as well as jewellery.

Tigers in South Africa are often used to supplement the thriving bone trade in South East Asia. Consumers are not aware of what animal the bones they purchase comes from and think all bones they buy are from tigers, and because the export of lion bones is legal in South Africa, they continue to satisfy Asia’s appetite.

Since 2008, nearly 7,000 lion skeletons totalling roughly 70 tonnes have been exported from South Africa to South East Asia, for medicine and jewellery.

The Department of Environment, Forestry and Fisheries’ CITES policy deputy director, Mpho Tjiane, believes that tiger trade in South Africa is non-commercial, and that the facilities they call home do not have to be registered with CITES, de Waal said.

This despite evidence proving that there is a definite growing trade in live tigers, parts and bones coming from South Africa that are laundered as lion bones.

The breeding and trade of tigers for reasons other than conserving them in the wild is illegal.

This World Tiger Day, Blood Lions has renewed its call to Deff minister Barbara Creecy to scrap the country’s lion bone quota and destroy all stockpiles. This could be the move needed to keep the last remaining wild tigers alive.

“We can’t turn a blind eye to the damage South Africa’s legal lion bone trade inflicts on the conservation efforts of the last remaining tigers in the wild,” de Waal implored. 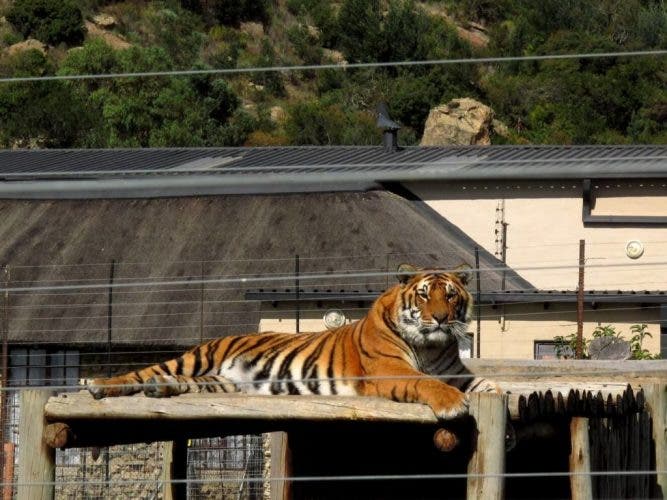 Captive-bred tigers are shrouded in secrecy in South Africa, with no facilities being registered. Photo: Ian Michler / Blood Lions

If you would like to know more about the shocking conditions captive-bred tigers and lions are forced to live in, click here to watch a short film by Blood Lions as part of their Not Medicine campaign.