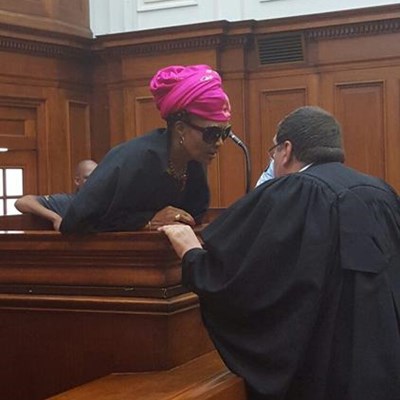 Maqubela, smartly dressed with her signature headscarf, this time in pink, looked visibly upset as Judge Andre Le Grange pronounced that her legal team had not persuaded him that another court would come to a different conclusion.

Less than half an hour before this ruling, Le Grange had denied Maqubela bail pending the outcome of her appeal to the Supreme Court of Appeal (SCA) against her murder conviction.

“On consideration of all the facts before me I’m not convinced the applicant showed it will be in the interests of justice to permit her release on bail,” Judge Le Grange said while delivering his ruling.

Le Grange said he was convinced that the trial court which found her guilty of murder, fraud, and forgery, considered all the facts before it before it convicted her.

She is also serving a three-year prison term for her conviction on fraud and forgery charges relating to her altering her husband will after his death.

Maqubela’s decomposing body was discovered in his luxury Bantry Bay flat two days after he was murdered in June 2009.