Have you paid your tax yet? 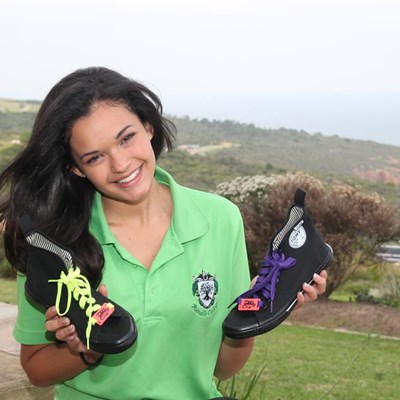 Local beauty Alexandra Swarts has paid her tax. Have you? Photo: Myron Rabinowitz
NATIONAL NEWS - Alexandra Swarts, from Herold's Bay, one of the 44 semifinalists in this year’s Miss Teen Commonwealth SA competition, shows off her funky colourful Tekkie Tax shoelaces and asks: "Have you have paid your tax this year? No, not that kind of tax... I am talking about Tekkie Tax!”
With these words the organisers of National Tekkie Tax Day on Friday 29 May is hoping to convince the public to support there worthy campaign. Tekkie Tax is a national campaign raising funds for the biggest number of welfare organisations in SA.
The first Tekkie Tax campaign took place in 2013 and R2,4-million was raised. In 2014, a total of 286 welfare organisations participated and, with the help of thousands of supporters, raised R4,8-million. After a successful audit in October, all proceeds were distributed in November 2014.
Alexandra says you can even choose who should receive your donation. "For R30 I bought my colourful shoelaces at George Child and Family Welfare. I have decided on Child Welfare as my choice."
There are five different sectors of welfare organisations to choose from. Decide which one (or more) lies closest to your heart and obtain a sticker which represents that group for only a R10 donation per sticker.
'We bring you the latest Garden Route, Klein-Karoo news'