The unit has a 100% success rate and specialises in rhino protection, anti-poaching, tracking, K9 training and investigations.

Calimero, or Cali, is the general of the contraband detection unit at Pit-Track. These dogs and their handlers help protect endangered wildlife. Photo: Supplied

This prestigious group of animals are cannot be replaced by man or machine. They are able to patrol with their owners in some of the most dangerous territories in the world.

This is according to Pit-Track K9 anti-poaching unit.

The unit has a 100% success rate and specialises in rhino protection, anti-poaching, tracking, K9 training and investigations.

“Our K9s are our eyes, ears, noses and companions in the bush,” Pit-Track said.

Dogs are able to follow scent rather than footprints, which allows anti-poaching units to sprint on the follow and release attack dogs on poaching suspects. This is much faster than conventional tracking methods. 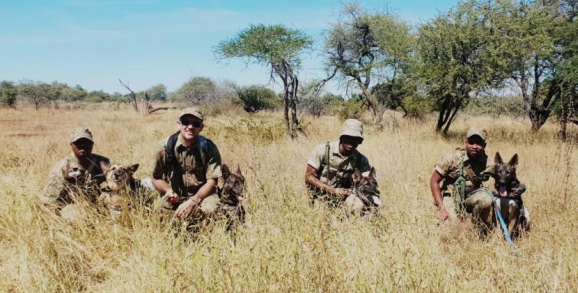 Pit-Track prefers to use specific dog breeds. Here are the team members, each with their own talents and quirks:

The Boerboel
Pit-Track’s boerboel, Hulk, weighs around 80kg. Hulk does both hard and soft harbour area protection and also patrols. Hulk has “exceptional” apprehension abilities, “with the heart of a lion”.

Sable shepherd Torro weighs 30kg. He is DH-5 accredited for the detection of rhino horns, ivory and firearms. Torro is a mischievous mutt dedicated to protecting wildlife.

A new member to the pack, Achilles, is also DH-5 accredited in contraband detection and likes to steal socks from the team’s tent while in the field.

The team’s star contraband detection K9 is Rex, a sable shepherd who loves to play.

“If he can’t find a toy to bring you, he will go on a search and if left with no choice, will possibly bring back a stone the size of a pea,” Pit-Track’s operators joked. He and Torro are best friends and regularly get up to mischief. 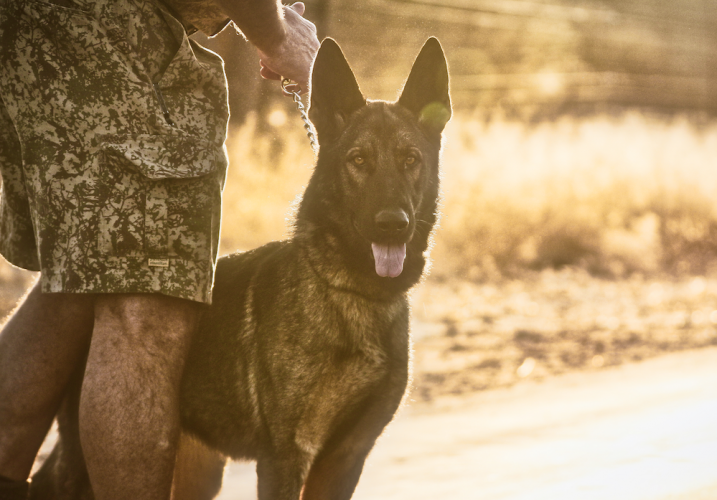 Pit-Track’s Belgian malinois, Koa, has excellent scent tracking skills, both for humans and wildlife. He likes to bite and is able to capture poachers. He also has unlimited energy, and loves visiting his friends at the rhino orphanage.

Another Pit-Track K9 member, a boerboel and malinois cross, is called Misty. She is Hulk’s daughter and very loving, with “no concept of personal space”.

Balloo the Belgian malinois weighs 45kg. He is a human scent tracking dog and apprehension specialist who takes his job very seriously – until he knocks off, after which he acts “like the unit clown”.

Charlie is a boerboel malinois cross. At just 35kg, she is a specialist in apprehension and tracking. She is described by her handlers as “even tempered” and is well habituated to large game.

Another boerboel malinois cross, Rouge, is Charlie’s sister. She is at her happiest while walking in the field in her time out. 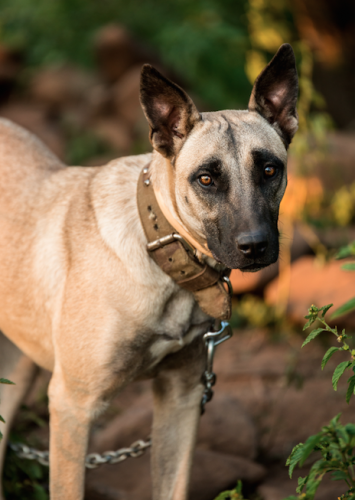 Elly is an expert in narcotics, firearms, rhino horn and ivory. She weighs 25kg and is known as the princess of the unit, “doing things at her own pace”.

Calimero is a Dutch shepherd pitbull cross. Fondly known as Cali, he is the general of the contraband detection unit. Although highly efficient and confident while on duty, Cali is a sucker for affection, especially tummy rubs. 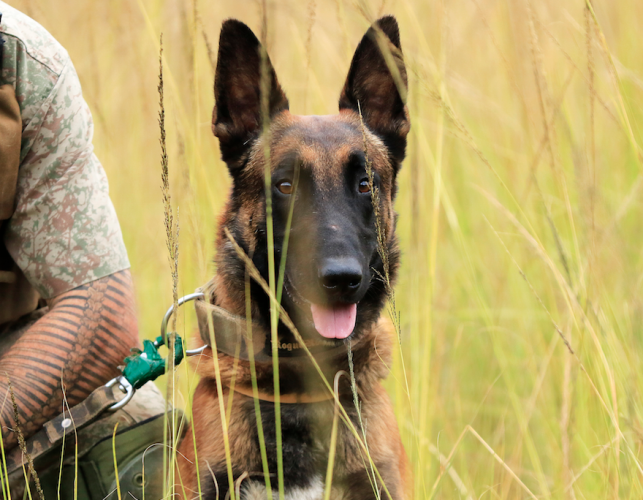 Balloo with his handler. Photo: Supplied

Rottweiler
The lone rottweiler of the pack is Yanka, an all-rounder with training in human scent tracking and contraband detection. She is focused, but loves her toys and is very protective of her handler. 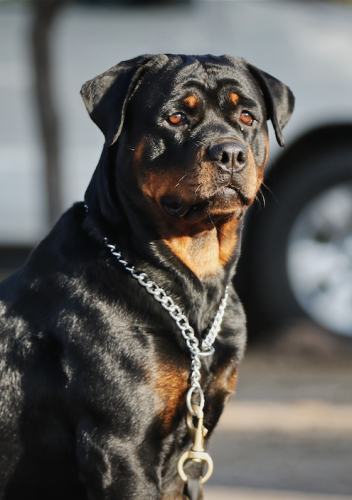 What Pit-Track does
Pit-Track’s K9 unit protects some of the most poached animals on the planet, including rhinos and elephants.

One elephant is lost approximately every fifteen minutes – that’s 96 elephants a day and around 35 000 elephants every year.

Today, there are less than 18 000 rhinos left in the world. At the turn of the 20th century, more than 500 000 roamed various parts of the world. Between six and eight rhinos are poached every day, while 90% of the world’s rhinos are in South Africa.

The lion population has suffered immensely, with numbers dwindling by up to 96% compared to 50 years ago. They are lost through trophy hunting, the lion bone trade, canned hunting, poaching, human-wildlife conflict issues and loss of natural habitat.

Less than 14 000 wild lions are left, with less than 2 500 male lions, who are prime targets for trophy hunters and poachers.

Leopards are some of the most adaptable creatures on the planet, but even they cannot beat poachers hunting them for their skins and parts, or resolve intense human wildlife conflict issues.

In the last 50 years, leopard populations have dropped from close to one million, to less than 75 000. Just 10% of their population remains.

Pit-Track’s K9 unit seeks to protect what animals are left, preserve their habitats and attempts to restore balance in a frail ecosystem.

“In the last 50 years, we have lost 60% of the planet’s wildlife. Every living creature on this planet is under huge threat; the majority of what’s left is already on the brink of extinction,” said Pit-Track director Carl Thornton.

“The time to act is now, this is the responsibility of the dominant species on the planet as the cause of all these problems. Human beings and only us can repair the damage we have caused.”

To help fund anti-poaching units such as Pit-Track, you can sponsor a dog. You can also help contribute to the K9 unit’s upkeep, including helping pay for their training and veterinarian services, nutrition, accreditations and gear.

Click here to find out more about Pit-Track, and how you can help.