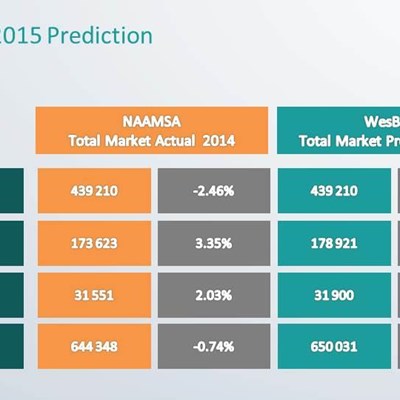 Prediction for 2015 from WesBank.
MOTORING NEWS - South Africa's new vehicle sales are anticipated to hit a ceiling, with year-on-year growth of only 0,87% expected in 2015.
WesBank shared its forecast for the performance of the motor industry in 2015 at the recent SAGMJ WesBank Car Of The Year announcement in Midrand.
"Growth of passenger car sales seem to have hit a sort of artificial ceiling," says Simphiwe Nghona, executive head of WesBank's motor division. The 'wheels bank' says sales in the Light Commercial Vehicle (LCV) segment are expected to see the highest growth at 3%, as consumers substitute passenger cars with LCVs and businesses replace fleets.
Medium and heavy commercial vehicles sales should improve marginally at 1,1%. The current high sales volumes in the passenger car segment were achieved by growth during the post-recession recovery period. This year's respectable passenger car sales, are expected to remain unchanged compared to 2014.
The prevailing low interest rates continue to drive sales confidence of consumers and dealers. Marketing incentives from manufacturers are also helping to drive sales. These include trade-in assistance and cash-back packages, which help cover the shortfall when consumers choose to trade in vehicles.
While overall household debt is still at high levels, the last 18 months have seen a consistent decline which is read as a sign that consumers are experiencing an easing of pressure on budgets.
Depreciation of the rand continues to have a direct effect on vehicle sales. Last year new car price inflation exceeded CPI and after a small reprieve fuel prices are on the rise again.
The knock-on economic effects of a weaker currency will lead to higher living costs, ultimately affecting consumers' budgets and if they would be in the market for a new car.
Those who do buy, may opt for a pre-owned vehicle. The increasing shift to used is a result of consumers knowing they can get better value for their money if they forego the luxury of a new car.
"Overall, our vehicle sales forecast for 2015 is characterised by a market in which the positive and negative factors even out," said Nghona. "Despite the low expectation of growth, sustaining activity at these levels in current economic conditions would be a positive."
In 2014 WesBank forecast that passenger vehicle sales would decline 2%, with total industry sales down by 0,6%. A strong sales recovery in the second half of the year showed passenger car sales ended at -2,46%, while the industry total for 2014 ended down 0,74%. Prediction for 2015 from WesBank.
'We bring you the latest Garden Route, Klein-Karoo news'