Suzuki making the most of 4WD

I must admit that a sense of “Why am I doing this again?” cropped up when an invitation from Suzuki to attend an off-road experience at Bass Lake near Vereeniging landed in my inbox recently. 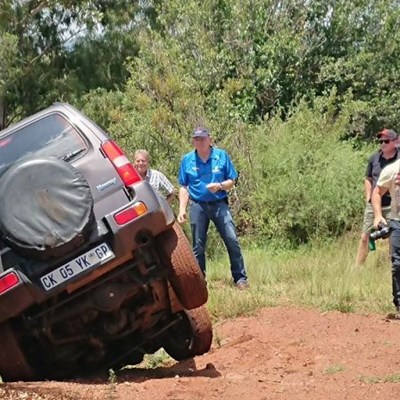 While going off-road and finding out what a four-wheel drive (4WD) can really do has been part of my life since the turn of the century, I really entered into the deep end by taking part in a round of the Bridgestone 4x4 Club’s annual trek to the Wolwekloof off-road course near Pretoria last year.

Although I did accomplish my objectives that day, being behind the wheel for the first time in a competitive sense was nerve-wracking, especially against competitors who have been in the game for years. This time though, there was to be no competition, but rather some educational off-roading with the chance to get to know the basics of a 4WD vehicle, and indeed, just how these vehicles can surprise when taken onto the rough stuff.

Before getting down and dirty though, my fellow scribes and I were given a “straight-to-the-point” talk on 4x4-ing by Bass Lake’s owner Alan Pepper, who has been doing this kind of thing since 1973 and also taught countless students the craft over the last few years.

As someone who broke away from a certain method of off-roading aimed squarely at Land Rovers back in the day, Alan’s wealth of knowledge, explanation of the course and the unique techniques involved when it comes to tackling obstacles, had us feeling confident and me rethinking everything I thought I knew about off-roading thus far.

More importantly, our vehicles for the day consisted of Suzuki Jimny’s and a single Grand Vitara, both of which would prove rather impressive. With low-range engaged and there being no sense of urgency, we headed to the first obstacle; a damp wash-out where wheel placing proved key.

With Alan guiding us through, I managed to perfect my wheel placing but failed to find the correct balance between power and not stamping on the brake. The result was that I had to take a second bite, which proved plain sailing as what I had learned, yet failed to apply the first time around, was to stand me in good stead for what followed.

Next, we were given a demonstration of going up a steep incline. Contrary to many a theory, mashing the accelerator is not always the solution as Alan showed by heading up at a far from frantic pace while maintaining momentum. This approach, together with precise wheel placing while avoiding the brake or clutch pedals, was to come in handy during the next test; a rut-ridden climb with a turn at the top. Needles to stay, the Jimny made going up this easy.

With a number of water crossings thrown in and the drive around the rim of the former mine quarry housing the waters of Bass Lake failing to dampen our fun, the most extreme challenge came in the form of what Alan likes to refer to as “instructor’s revenge” which is a sharp, deeply rutted off-chamber ledge where the outside rear wheel is lifted clean off the ground.

Despite Alan once guiding us through with the knowledge that no vehicle has ever flipped onto its side at this point, there was still a lot of nerves and anxious faces amongst my colleagues. In spite of trying to keep a straight face, I will concede that my nerves were shot as I inched the Jimny forward.

In what felt like a scene from a movie as the tension reached its conclusion, I tried to maintain my best poker face on as the Jimny slipped over the ledge and stood still with its right rear wheel motionless in the air. Cracking probably one of the most nervous smiles of the day, my ordeal lasted a few minutes more as I gingerly coaxed the Jimny forward and waited for the reassuring thud of the wheel touching the earth once more.

The last bit of our trek, after a few more obstacles, was a slalom course in both high range 4WD and standard two-wheel drive (2WD). Admittedly, this was carried out with Alan behind the wheel.

Although we had a good idea of what to expect, seeing it for real was still eye-opening as the Jimny proceeded to slip and slide around before pitching sideways in 2WD at less than 80 km/h. Switched to 4H though, the tail-happy antics were kept to a minimum and the car remained planted as Alan ended the slalom in a much less dramatic fashion.

It wasn't only a fun day out, but also one where a better understanding of the 4WD was gained. While it is a sad reality that very few owners would ever take theirs out of the city despite it being endowed with the highest of go-anywhere tech, those who do will gain a new appreciation for a type of vehicle whose talents extend much further than just a city runabout.