While it is only due to debut in just over two weeks, the much anticipated Jeep Gladiator, until recently known as the Scrambler, has accidently leaked in series of production images ahead of its supposed reveal at the Los Angeles Auto Show. 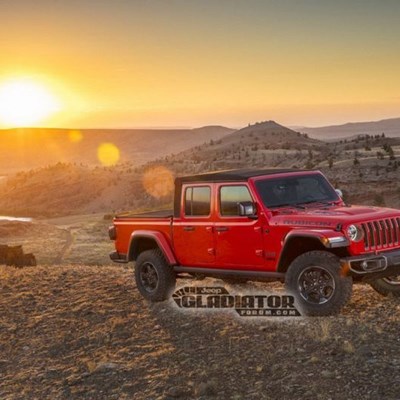 Obtained by jeepgladiatorforum.com reportedly from Jeep parent company Fiat-Chrysler Automobiles (FCA)’s website, which have since been deleted, the Gladiator, as expected from the series of spy images, renders and leaked details stretching back over a year, is virtually unchanged from the Wrangler at the front, with the obvious difference being the open loadbay at the rear that has a payload rating of 725kg. 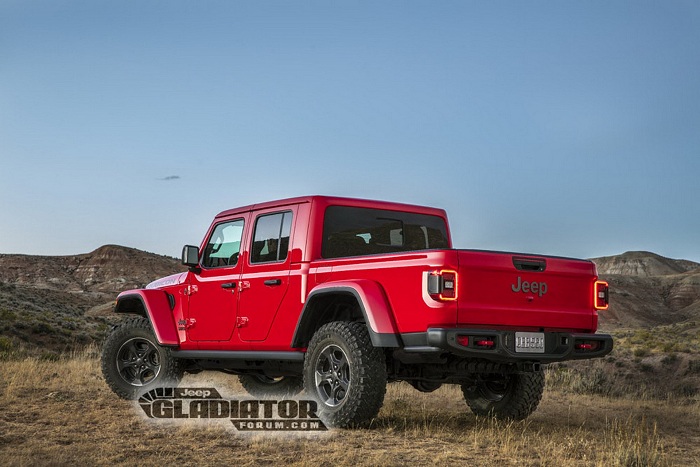 In addition to the images, more specification details via an internal document has also been published by the online forum, which shows that Jeep’s first pick-up in nearly 30 years will have a towing capacity of up to 3 469kg, a wading depth of 762mm and come with either a hard or soft-top roof, the latter a first for a FCA pick-up since the extremely limited run Dodge Dakota Cabriolet made between 1989 and 1991.

Like the Wrangler, the Gladiator will offer buyers the option of having its doors and roof removed as well as the forwards folding windscreen, while riding on 33-inch all-terrain wheels set to be standard. 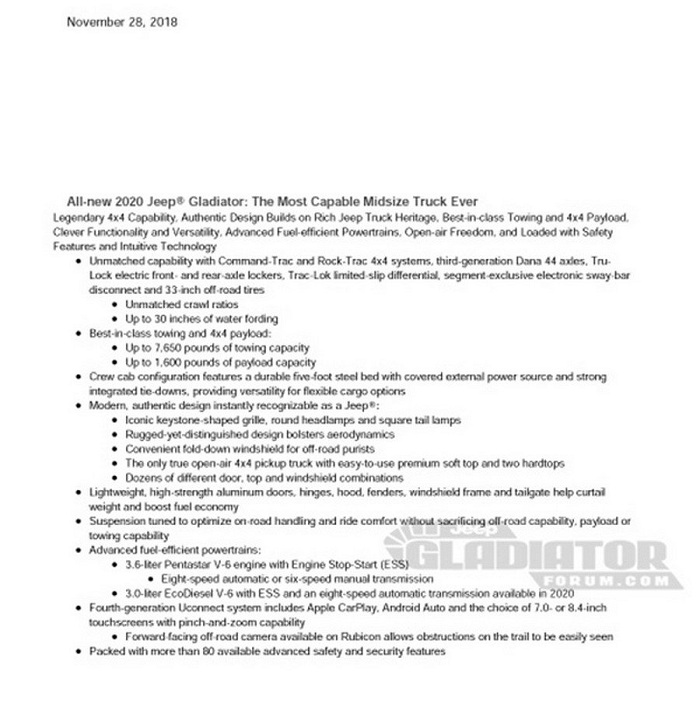 Unlike the aforementioned renders however, Jeep will only make the Gladiator available in Crew Cab bodystyle with a load-bed measuring 1.5m, and with the same array of off-road hardware like the Wrangler, such as the Command Trac with Rock-Trac 4x4 setup, Dana 44 axles, Tru-Lock electronic front and rear differentials, Trac-Lok limited slip differential and a segment first electronic sway-bar that can disconnected when not in use.

Although Jeep is only expected to confirm final specs in the coming weeks, the internal document has disclosed that the Wrangler’s mild-hybrid 2.0-litre turbocharged petrol engine, dubbed Hurricane, will not be offered in the Gladiator, therefore leaving the 213kW/353Nm 3.6-litre Pentastar V6 mated to either a six-speed manual or eight-speed automatic gearbox, and from 2020, the 3.0-litre EcoDiesel (CRD) V6 used in the Grand Cherokee and Ram 1500 teamed to the latter ‘box only.

More details are expected to emerge in the coming days leading up to the Gladiator bowing in LA.