AFTER a solid performance in this year’s gruelling Dakar Rally, Iveco has cemented itself as a force to be reckoned with. The team’s 660kW number 507 Trakker racing machine completed the 10 000km Dakar Rally, finishing in first position in the truck category. 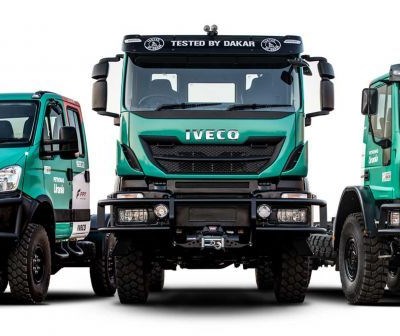 To celebrate this, locally, the brand has produced its own replica of the racing machine. I had the opportunity to ride shotgun in the machine through an off-road section just outside Lanseria and can report that I have a newfound respect for the Dakar competitors; it’s seriously taxing on the body with the constant bumps and jumps - what an experience!

The new Eurocargo truck is significant for the brand as it’s being assembled in South Africa. In addition, the model is the marque’s main contender in the heavy truck market, which generates annual sales of more than 10 500 units.

The new model is being assembled at the company’s new R530-million plant in Rosslyn. The good news is, it’s still Euro 3 compliant, meaning it can run on 600ppm diesel. There are seven different gross vehicle mass (GVM) variants ranging from 10 to 18 tons and five power categories, from 132kW to 206kW.

There were also Tested by Dakar Limited Edition kits on show. This more exuberant-looking livery will be available on the 4x4 versions of the Eurocargo, Daily and Trakker.

The 4x4 version of the Daily has been quite popular in the local market. Its 115kW motor, 5.5-ton weight and 3.5-ton towing capacity, means it’s a formidable machine. Add the locking differentials front, centre and rear and you have, as I discovered, a more than capable 4X4. I used one to tackle a 4x4 course and its mechanical approach to off-roading is refreshing in an era of electronics.

I also had my first big truck experience in the Trakker, which is an off-road truck. I found it surprisingly easy to drive on a narrow dirt road. It even does the climbing, descent and off-road work you’d expect from a traditional off-road vehicle. There’s a massive amount of torque which definitely helps in all-terrain situations. I was also surprised at the kind of creature comforts such as Bluetooth audio and steering-mounted controls. The model is available as a 4x4, 6x6 and even an 8x8 model for seriously hard work.

The affiliation that the Iveco brand has, with an event as extreme as the Dakar, can only do good things for the brand. It serves as a platform, which showcases the brand’s products in terms of reliability and longevity, which are two key factors in the trucking industry.