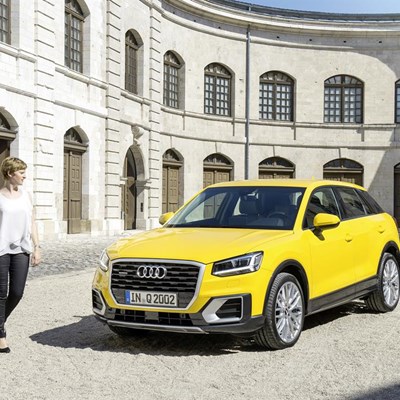 The Audi Q2, seen here at the Turm Triva in Ingolstadt, was German women's choice as most desired car.
MOTORING NEWS - A total of 4 189 women with a driver's license between 18 and 69 selected their favourite SUV for Bild am Sonntag newspaper and the Innofact market research firm.
The design, price and desire to own a vehicle were part of the assessment.
The results were that Germany's women rated the Audi Q2 number one among 93 competitors – a mere eight months after its launch in Germany.
For the second consecutive year, Audi achieved overall victory in the Automotive Innovations Award in the premium manufacturer category. With 84 new improvements in the reporting period, Audi showed the most innovation of all and is therefore the most innovative brand overall, the jury stated in its explanation for the decision. Four subject areas were incorporated into the evaluation: automotive drive systems, autonomous driving and safety, vehicle concepts and body and interface and connection.
In the respected Red Dot designs, the Audi Q2 won the worldwide award for product design 2017. This year the independent, international jury of experts received and assessed submissions from 54 countries. The Red Dot jury awarded the Red Dot: Best of the Best prize to the Audi Q2 for its superior design quality and trend-setting design in April.
Audi also celebrated a big win at the Motor Klassik Awards 2017. The Audi Sport quattro from 1983 won in the "Classic of the 1980s" category with 27,2% of all votes. More than 22 000 readers of the popular classic car magazine participated in the voting. The Audi Sport quattro was built in very low volumes and only 214 units were sold - the exclusive cars also being among the most expensive cars from the brand.
INTERNATIONAL HONOURS
Audi shone in the Middle East sales region with a wealth of prizes. The Audi S8 Plus was honoured as Luxury Saloon of the Year by Wheels Magazine Middle East. The Audi R8 won in the Best Super Sport Car category at the Arabia National Auto Awards. In Abu Dhabi, the Audi R8 took two prizes in the Middle East Car of the Year Awards: Overall Car of the Year and Supercar of the Year. Additional awards at the same event went to Audi models A4, TTS and S8 Plus in their respective categories.
Audi Middle East was also victorious at the Middle East Car of the Year (Mecoty) Awards with wins in most categories nominated.
The Audi models A5 Coupé and A5 Sportback achieved the maximum 5-star rating in the Australasian NCAP crash test for excellent active and passive safety during March. The institute has carried out crash tests for the Australian and New Zealand region since 1993 and to date has tested 590 passenger cars and light-duty commercial vehicles.
Technology and lifestyle magazine Stuff Singapore has selected the Audi A4 as Car of the Year from a large field of competitors. The magazine rated the car as a trend setter and especially praised the many assistance systems as well as the traffic jam pilot.