Consumers should think long and hard before hiring a vehicle.

NATIONAL NEWS - "If you are about to hire a car, stop yourself. Seriously. Stop now. Make alternative arrangements. Get a friend to pick you up from the airport. Use a ride hailing service. Make whatever plan you must but whatever you do, do not submit your card for payment and sign on the dotted line.

If you can’t make alternative plans, educate yourself on the dangers that come with hiring a car and take the necessary vehicle-check precautions.

Note that once you take responsibility for the vehicle, you are making yourself financially vulnerable in a way that you cannot possibly imagine.

That’s what I discovered when I hired a car a few months ago. Several days after returning the vehicle, I received an SMS saying that I had returned it with unspecified damage to the roof and was being charged R3 500 for the repairs.

So began a futile odyssey to get the rental agency to provide proof that the car was indeed damaged under my watch.

After going through call centre purgatory, I wrote to the rental agency, saying the collection agent and I had both inspected the car, and neither of us spotted any damage. In return, I got a form letter saying there were multiple inspections afterwards, which somehow found the damage.

I asked for proof of the damage, and instead got invoices from the panel beater as proof of repair.

In summary, I did not get my money back, was not provided with any evidence that the vehicle was damaged, and was not advised on how I could escalate my complaint.

Foreinjured is forewarned
The next time I hired a car I took precautions. I got someone from the car hire company to inspect the car with me. We recorded every dent, scrape and smear on the vehicle, including a small but noticeable indentation on the front bumper.

And then, like before, I received an SMS from the very same rental agency saying I had returned the vehicle with a damaged bumper and was on the hook for R1 500 to repair it.

To put it mildly, I was not happy. 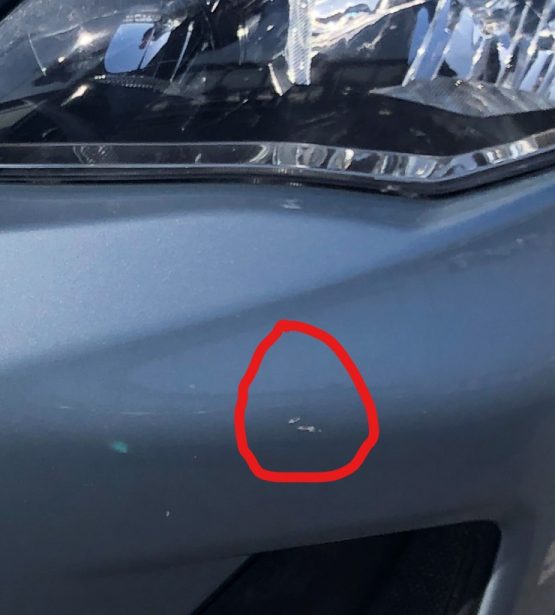 To fix a small scratch that had been noted by the company before I accepted the vehicle – R1 500. Photo: Larry Claasen

I called the company’s call centre, disputed the claim and then received an email, which cc’d the collections manager, confirming the dispute.

I upped the ante. I replied asking for the collections manager’s superior’s name as I wanted to report him for poor customer service.

Then something unexpected happened. I got good service.

The collections manager, who had been cc’d in several of the mails in my previous dispute, called me back and promised to sort out the issue.

Soon after, I got an apologetic mail from said manager saying the vehicle checklist had been found and that the person responsible for this oversight would be held responsible.

A broken system
My latest dispute has been resolved but I am still not happy.

Some readers might have noticed that I have not named the rental agency. The truth is, the name doesn’t matter because if you take even a cursory glance at customer review sites you will see this kind of disgraceful, lazy and inept service is widespread across companies.

All the large rental agencies – Avis, Bidvest, Europcar, Hertz, Thrifty, First Car Rental and Tempest – have dismal rankings on the Hellopeter customer service raking site, with none scoring higher than three out of 10 on its Trust Index Rating.

It’s the same story on TripAdvisor, Facebook and Google review, where similar disputes are widespread. There are also numerous complaints of deposit amounts not only being excessive but being held for weeks. Customers have also questioned why “extra amounts” were deducted from their accounts without explanation.

What stands out about these complaints is the exasperation of the people making them. They had just come back from a wedding, gone on a long-awaited holiday, or visited a dying loved one.

Their fights with the rental agencies took the shine off what should have been happy experiences or rubbed salt into the wounds of difficult ones.

So how is the industry responding to these complaints?

As far as I can tell, it isn’t. The industry body, the Southern African Vehicle Rental and Leasing Association (Savrala), does not even have an ombud.

Instead, it offers what it calls a ‘conciliation service’ to help resolve disputes. This service is not exactly an independent arbitrator, as the conciliation committee – a body made up of two of its own members and “an independent legal practitioner” – gets to decide on formal complaints.

Both parties in the dispute are requested to make a “reasonable deposit to cover the estimated expenses” of the committee. The cost will eventually be carried by the “losing” party.

Savrala does, however, in its code of conduct, encourage its members to learn from customer disputes. “Give complaints a full and considered response. Learn from the complaint and implement any changes needed to prevent the incident from happening again.”

It would be nice if rental agencies actually did this."