A smartphone doesn’t make you smart

RESEARCH shows that our phones are horrible distractions when behind the wheel. You may think you can get away with it, but as Gerhard Horn found out, you can’t. 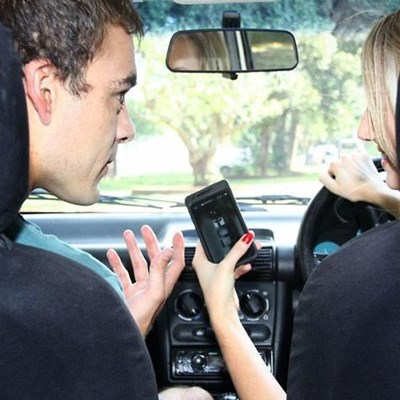 I JUST read on the internet that a phone says a lot about the person who owns it. If that’s true, I’m cheap, reliable and about as technologically advanced as a matchstick.

Not that I mind. My phone cost me R300 and it allows me to make and receive calls and messages over a cellular network. It also has a torch and the battery lasts for two weeks. For everything else, I use a specific brand of tablet favoured by graphic designers and pretentious people the world over.

This isn’t just a practical solution to my communication needs; it also means I don’t have to carry a so-called smartphone. They are hateful things; I should know as I used to own one. I threw it away the day I realised that smartphones would be the downfall of physical human interaction.

It became abundantly clear one day I met up with a friend for a couple of cold ones after a long week. We tried chatting about life, love and everything else, but we were constantly interrupted by that hateful pinging noise announcing that yet another message had come through. Instead of ignoring these cries for attention, my friend picked up his phone and responded, leaving me to ponder life, love and everything else by myself.

After what seemed like the hundredth ping, I lost my temper and gave my friend a self-righteous speech about life passing him by while he was staring at the screen of his stupid smartphone. And now it seems that your life is also likely to end while you stare at the screen of your smartphone.

According to a study carried out by IPSOS on behalf of the friendly folk at Goodyear, the young people in South Africa are far more likely to get distracted by phone calls and internet use behind the wheel than their European counterparts. This upsetting statistic has emerged as part of Goodyear’s third annual Road Safety Survey.

To better understand driver safety, Goodyear took a careful look at the driving habits of 6 400 drivers under the age of 25. The survey took place in South Africa and 15 other European countries and unfortunately, our young people - as we first saw in last week’s opinion piece - didn’t fare all that well.

Young South Africans emerged near the top of the pile of youngsters who use their phone to make a call while behind the wheel. The percentage of youngsters who confessed tallied up to 61%, compared to the global average of 44%. I have a feeling the youngsters in the UK are feeling rather smug, as their total comes to only 15%.

South Africans are also more likely to use their smartphones to send text messages, engage in social media and read e-mails while on the go. A staggering 65% admitted to doing this while driving, even with strict laws forbidding this behaviour.

As if that’s not bad enough, there are a few more traditional activities that divide our attention as well. The most common of these include drinking, eating, reading a map, changing GPS settings, applying make-up, styling hair, kissing and (oddly) shaving.

According to the study, the brain is not capable of multi-tasking (so it’s not just us men), but only able to focus on tasks sequentially. Our frontal lobes get overloaded with information, which leads to a condition known by experts as “inattention blindness.” This is basically just a fancy way of saying that a person might look at something, but won’t see it or recognise it as a hazard.

I think the root of the problem, which is also mentioned in the report, is a false sense of confidence.

People tend to think they’re more special than they really are, especially when it comes to driving. I read somewhere recently that around 85% of men rate themselves as excellent drivers and I suppose it’s the same thing with the smartphone issue. I can imagine someone sitting behind the wheel, thinking to himself: “This law about cellphone use behind the wheel is totally ridiculous and obviously meant for mere mortals and not an advanced being like myself.”

And he’ll keep on thinking that way right until the point where he hits the car in front because he was too busy telling his so-called friends on Facebook about something interesting that happened on the side of the road.

You see, that’s the problem. We all like to think we’re special, but it’s a statistical impossibility. The Harvard Review claims that only 2% of the population can multi-task successfully. That means that 98% of the people who think they can pull it off, can’t.

So what’s to be done about this problem? Goodyear suggests that youngsters put their phones to one side when they get behind the wheel. This is a worthy tip, but, as anyone who has a teenager in the house will tell you, not as easy as that.

The long-term solution is better driver training. Goodyear is doing its part by being a part of two driving academies in South Africa and should be commended for it. Is it enough, though?

It’s certainly a start, but to really make a difference you need to reach them a few years before they’re old enough to get behind the wheel.

Staring at the screen of a smartphone isn’t just a danger while driving; it’s a threat in everyday life as well. Switch the stupid thing off for a few minutes. Don’t get caught up in the digital world - the real one is so much better.