Up to 70 whales stranded in southern Australia

The whales are believed to be stranded on a sandbar.

LIFESTYLE NEWS - Around 70 whales are stranded in a bay on the Australian island of Tasmania, officials said Monday, with marine experts now mobilising to see if a rescue is possible.

The whales are in Macquarie Harbour, on the island's rugged and sparsely populated west coast, where they are believed to be stuck on a sandbar.

Police are on site and marine experts are being deployed to assess the situation, Tasmania's environment department said.

"Additional crews with whale rescue gear will arrive later today," the department said in a statement.

The creatures are believed to be pilot whales but the species has not yet been confirmed.

The latest stranding comes as a humpback whale that was stuck in a tropical river in Australia's north finally returned to the ocean after more than two weeks. 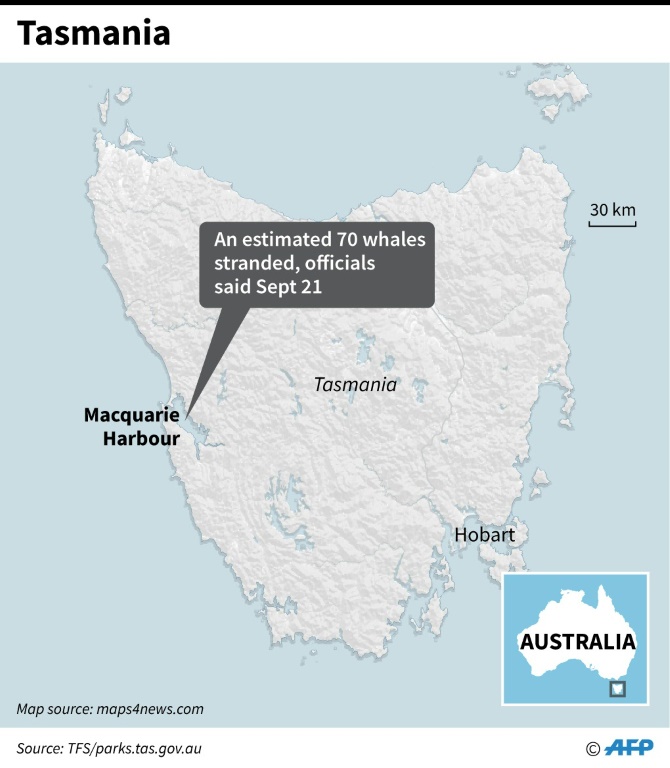 Map showing Macquarie Harbour on the Australian island of Tasmania, where an estimated 70 whales have become stranded.

Public broadcaster ABC reported the creature, which spent 17 days in the crocodile-infested waters of Kakadu National Park, has been spotted in open seas off Darwin.

Scientists had been weighing options for guiding the humpback to safety after it became the first known whale to travel up the muddy river, but were relieved when it returned to sea of its own accord.