Love and dust: A report on AfrikaBurn

A week in the desert for SA’s regional burning man event.

Afrikaburn, like other burns worldwide, runs on, “The ten principles of Burning Man”, which, while not rules, act as a reflection of the community’s ethos and culture as it has organically developed since the event’s inception.

LIFESTYLE NEWS - The wind storm has raged for most of the day, sending pale orange sand howling across the Playa to coat the insides of tents, cars and camps in a fine sheen of dust. Now as the sun disappears behind the horizon and a thin strip of orange divides the distant mountain tops from the deepening blue of the sky the wind has suddenly ceased and people have begun to emerge from their hiding places resplendent in multi-coloured tights, waistcoats, faux-fur jackets, tutus, and headdresses.

There is little that can dampen the party mood of AfrikaBurn, but the dust storm slowed it down for a few hours, and the burners are ready to make up for lost time.

Around the festival the volume is turned up on powerful sound-systems that, even during the worst of the dust, had never truly been silent and within minutes dance floors are packed with eager revellers.

It’s a Tuesday, but looking around there’s no way to tell. At one of the theme camps “aTypical Bar”, service of their 24 hour a day, gifted alcohol has not stopped, and the bar is now once again filling up with the crowd who had partied there till 05:00 the previous morning.

An eclectic mix of bluegrass, country, hillbilly jams and blues music competes with trance and techno from other floors, and whisky bottles are being liberally passed around with a pickle juice chaser for the brave.

It’s the beginning of a night that will see this theme camp play everything from 90s hard rock to hip-hop and pop to a huge variety of people, and not stop until the last weary party-goers tramp off to their tents at 07:00.

Based on Burning Man
Based on Nevada’s world famous Burning Man festival AfrikaBurn seems to be going from strength to strength with annually returning camps delivering everything from piano lounge evenings, to movie nights, a spanking booth and yoga, yoga and yoga.

The diversity of accents is a testament to the feel of the place, which many well-travelled foreigners described as being, “Burning man in the early days”.

To try capture “The burn” as it’s fondly known, with any one phrase is impossible as each person who goes experiences a different thing. The heart though, and ultimately the point, of all the families with small children who cluster together in the early morning pancake camp, the silent speed dating sessions, numerous burn weddings and champagne breakfasts is the famous burns themselves.

Massive wooden artworks tower over the landscape of AfrikaBurn, dominating the vast empty central area known to burners as The Playa. This year they include a multi-story lamp, that festival goers can light up themselves with a tug of a rope, a playful Octagonal crab with adult size slides and an imposing wooden cobra that looms over dancers who cluster to listen to the DJs that play at its base.

Over the week each goes up in flames as baying crowds urge them on to a spectacular end and the particularly enthusiastic strip off their clothes to run laps around the embers. 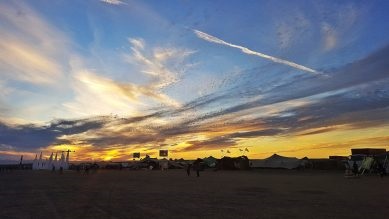 The final burn on the Sunday night, belongs to the Temple, a beautiful starry structure, where all week burners have been able to pin messages to loved ones they lost over the previous year. Here they write out and attach their hopes, regrets, dreams, and things they wish they could say to others in person.

When the Temple burns the crowd watches as the ashes blow these ephemeral statements to the sky. As one veteran says, “It’s the closest I have ever come to spiritual.”

The influence of Instagram
As the week draws to a close an increasing number of “sparkle ponies” take up attendance. These are burners with extravagant costume budgets, and selfie skills, who can be seen worrying more about their Instagram accounts than their gifts to their fellow burners.

Young models, skirts whipping in the wind, glance coyly into the camera from behind designer sunglasses while in the background a post-apocalyptic red post van trundles by and a dust-coated burn veteran can be seen swigging directly from a bottle of vodka.

It’s a world of contradiction, and these “influencers” have as much of a place in it as those that run theme camps. As the burn grows, and matures, however an increasing number of people are cottoning on to the fundamentals that make this place such a unique experience.

“The phrase ‘radical gifting’ can be a tough one for people to get their heads around,” says one theme camp lead who does not want to be named.

“We used to get a lot of people trying to buy things from us, or offering to trade us beers for our things, but this year they seem to be coming back with gifts they have made themselves, or brought back to South Africa from their travels to gift to others. There is definitely a growing understanding of the principles of the burn.”

An aTypical Festival
Afrikaburn, like other burns worldwide, runs on, “The ten principles of Burning Man”, which, while not rules, act as a reflection of the community’s ethos and culture as it has organically developed since the event’s inception.

These principles of radical inclusion, gifting, decommodification, radical self-reliance, radical self-expression, communal effort, civic responsibility, leaving no trace, participation and immediacy, create an environment of warmth and care for fellow festival goers, and the environment itself that, while not all encompassing just yet, does make it easy to understand why people return year after year.

To these ten principles the local burn has added an eleventh, which encourages each burner to spread the ethos of the festival and teach others to live up to the ideals.

It’s the night after the bluegrass party and once again “aTypical” bar is packed to the rafters. Onstage, a bearded man in a gown is urging a packed house to sign up for Bareoke; it’s Karaoke, but with the caveat that while on stage you need to take off at least one item of clothing in front of a large crowd.

The queue to get up and get naked is extensive and the expertly blended margaritas are flowing. While on paper it may sound sordid, no one in the room is there to leer. As people from a variety of backgrounds, ages and genders take to the stage, and strip off, the crowd cheers at the top of their voices, regardless of how traditionally good looking the person may be, or even their singing skills.

Every single participant comes off stage visibly glowing to hugs from all those around them. In the real world it seems unreal. Here, at the burn, it’s just a Wednesday.