Jacob Jordaens' initials appear on the back of the painting.

LIFESTYLE NEWS - A painting that hung for decades in a municipal building in Brussels has been authenticated as the work of Flemish master Jacob Jordaens, Belgian conservators said Tuesday.

After analysis including dendrochronology - dating works from the wood panels they are painted on - experts determined that it is the oldest known version of "The Holy Family" by Jordaens, painted in the early 17th century.

The "incredible discovery" was made by the Royal Institute for Cultural Heritage with the help of international experts as part of an inventory of cultural property in the Brussels district of Saint-Gilles.

The painting had hung high in an office in the Saint-Gilles municipal hall since the 1960s.

Jordaens, a leading Flemish Baroque painter along with Peter Paul Rubens and Anthony van Dyck, created the work in 1617 or 1618 when he was just 25, the institute said in a statement.

The analysis found that the wood used in the panel depicting the baby Jesus with Joseph, Mary and her mother Saint Anne came from the same tree as one used by Van Dyck. 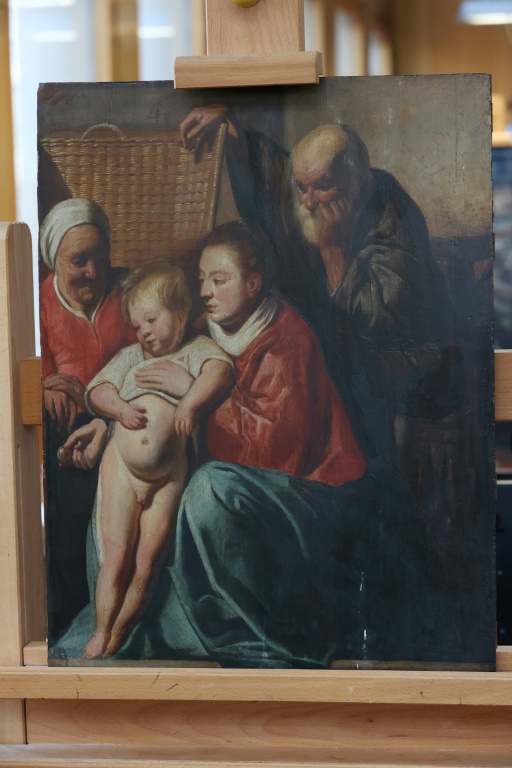 Jordaens painted "The Holy Family" when he was 25.

Jordaens used the same composition, with variations, in three other "Holy Family" paintings held by the Metropolitan Museum of New York, the Hermitage in Saint Petersburg and Munich's Alte Pinakothek, the statement said.

The discovery provides "something of a matrix of what he would do later," Saint-Gilles cultural heritage expert Pierre Dejemeppe told AFP.

"It will give us a better understanding of later versions" of the subject.

After its restoration, the work will be shown at the end of next year at the Royal Museums of Fine Arts of Belgium in Brussels.