In Mali, love for Italy's vintage scooter is timeless

It's love: Seydou Seck and his cherished Vespa.

LIFESTYLE NEWS - Seydou Seck's Vespa is 41 years old, but he sits upright and proud on the ancient grey scooter when he heads down Bamako's Independence Avenue.

In a city flooded with cheap, Indonesian-made two-wheelers, the classic Italian-made Vespa has a passionate following.

Enthusiasts like Seck reckon several hundred venerable Vespas are still cruising the streets of the Malian capital, most of them survivors of the 1970s.

"We all know each other and flash our lights when we pass each other," says Seck, 60, a wedding photographer by trade.

The Vespa - its name means "wasp" in Italian - has a special place in Malian hearts. Ageing beauties: Several hundred classic Vespas, most of them made in the 1970s, still cruise the streets of Bamako.

For many, it's a symbol of the 1960s and 70s, when the country was at peace and cities bustled with people streaming in from the countryside, eager for an easier life.

"The Vespa was the bike which young people bought when they started to make money," says Igo Diarra, curator of "Rencontres de Bamako" (Bamako Meetings), an upcoming biennial exhibition of African photography.

Vespa's manufacturer Piaggio estimates it has sold 19 million scooters since 1946.

Its sales network does not extend to Mali, but Vespas readily made their way into the country from neighbouring states, finding a ready market for people craving mobility.

One out of every two Malian households today has a moped, three times more than 20 years ago, according to official figures.

In Bamako, a sprawling city cut in two by the Niger River, two-wheelers are crucial for weaving through the traffic and crossing the clogged bridges.

But most of them are Jakartas - an Indonesian model that began to flood the local market at the start of this century.

Classic Vespas are starting to disappear as mechanics and riders struggle to get parts for repairs.

Seck says he and many other Vespa-lovers turn to Adama Guindo, 51, a mechanic who began to specialise in the Italian scooter when he started to work 36 years ago.

"In the old days, it was easy," Guindo said.

"But today it's complicated - the suppliers only send spare parts if there is a demand, and demand here is low." 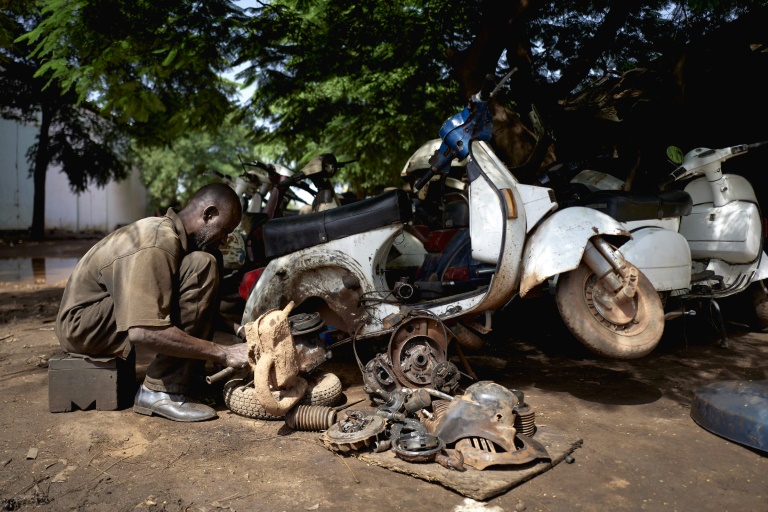 Old Vespas have to be cannibalised to provide parts for repairs.

A vicious circle is thus squeezing the Vespa: fewer surviving models means that fewer spare parts for them are available, and the scooter's distinctive wasp-like buzz becomes even rarer.

In Adama's workshop, four half-stripped Vespas sit waiting for the surgeon to cannibalise them and give life to others.

"The Jakartas have killed the Vespa, but we're still here!" Adama said with a tone of defiance.