People take part in the "Gorehabba" festival in Gumatapura village on the border of India's Karnataka and Tamil Nadu states.

LIFESTYLE NEWS - Dozens of exuberant villagers scooped up handfuls of cow dung to mould and toss at each other like snowballs this week for the Gorehabba festival, a local conclusion to India's most important festival, Diwali.

Similar to Spain's "La Tomatina" - an eccentric tomato-hurling celebration of the local fruit - residents of Gumatapura village instead fling something more earthy at each other: cow dung.

The festival is unique to a village where locals believe their god - Beereshwara Swamy - was born in cow excrement.

Some Hindus believe cows and everything they produce is sacred and purifying. Hindu nationalist Prime Minister Narendra Modi has pushed for greater protection of the beasts, and many Indian states have long banned their slaughter for meat.

"People from neighbouring villages and districts come to participate in this festival and enjoy it," local headmaster Shambu Lingappa told AFP Tuesday. 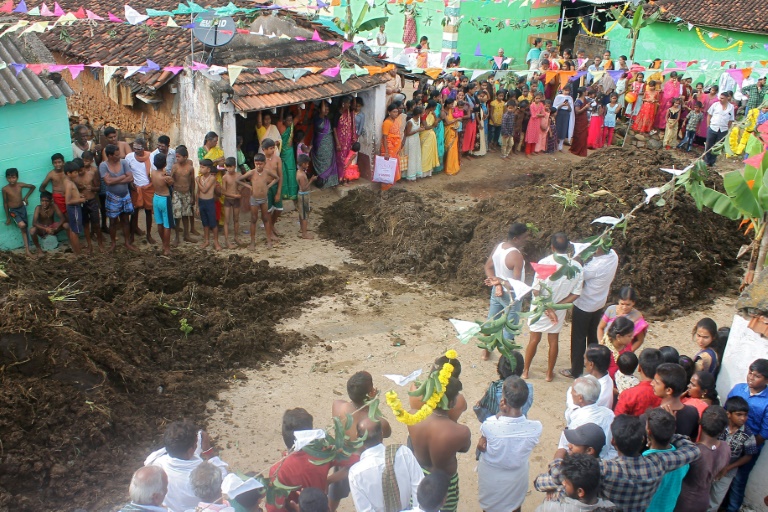 Let battle commence... cow dung is dumped in a pit before youths use as ammunition in a friendly war.

The day begins with the collection of "ammunition" from cow-owning homes in the village, which lies on the border of the southern states of Karnataka and Tamil Nadu.

The manure is brought to the local temple on tractors pulled by cattle adorned with marigold flowers, before a priest performs a blessing ritual.

After that, the dung dumped in an open area - with men and boys wading in to prepare their weapons for the battle ahead.

Women and girls take cover, but they risk "shrapnel wounds" when they try to record the revelry on their mobile phones.

Some may poo-poo the event, but for those in attendance the festival is as much about fun as it is about the perceived health benefits.

"By lifting cow dung with your hands, it cures a lot of diseases... and there is a strong belief that participants will never get sick," said school teacher Mahendra.