Trump set for Senate acquittal in boost to reelection campaign

Speaker of the US House of Representatives Nancy Pelosi ripped up President Donald Trump's speech.

INTERNATIONAL NEWS - President Donald Trump was set to win acquittal from impeachment in the Senate on Wednesday, hours after his partisan State of the Union speech triggered unprecedented protests from Democrats in a seething display of US political divisions.

The Democratic-led House of Representatives impeached Trump for abuse of office and obstructing Congress back in December, after weeks of investigations into his alleged corruption.

But far from being forced from office like Richard Nixon, Trump is set to see himself declared not guilty by his Republican party majority in the Senate.

The finale to the trial won't mean an end to Democratic-led investigations, but it gives Trump momentum in his bid to win another four years after a tumultuous, scandal-filled first term.

Although he has never got approval ratings over 50 percent during his presidency, this most polarizing of politicians was able to celebrate a personal best on the eve of the impeachment verdict - 49 percent, according to Gallup.

With a ferociously loyal right-wing base packing his frequent rallies around the country, Trump thinks he has enough strength to win.

And he got more encouragement when the fractured Democratic party messed up its first battle in the primary season, held in Iowa, with results being held back for a full day due to technical glitches.

Political war
America's pre-election divisions were on excruciating display in Congress during Trump's annual State of the Union late Tuesday.

After an address of one hour and 18 minutes, filled with Trump's boasts and claims of a "great American comeback," the Democratic speaker of the House, Nancy Pelosi, ripped up her copy of the speech live on television.

But the event had begun with no less animosity, when Trump first walked in and refused to shake the speaker's hand - as is customary. 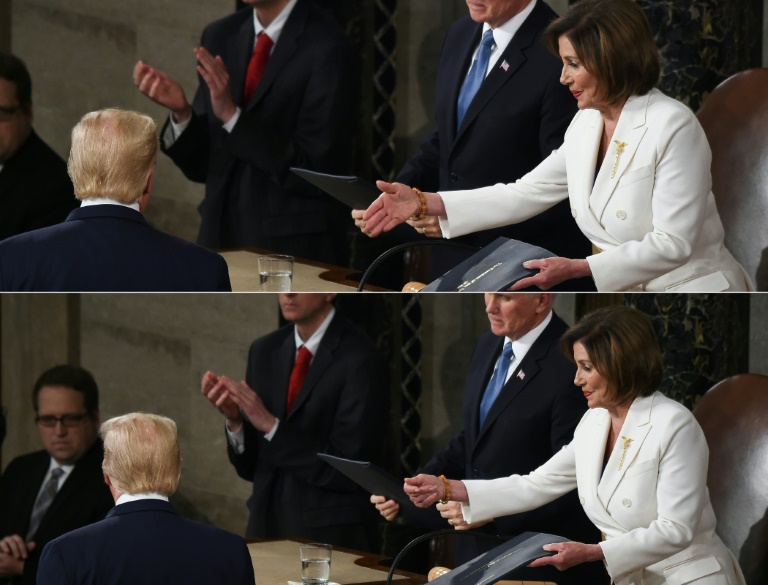 Speaker of the US House of Representatives Nancy Pelosi tried to shake hands with President Donald Trump but he turned away.

Pelosi put out a hand and Trump turned away, leaving her arm in thin air.

Democrats responded to Trump's speech by refusing to follow Republicans in repeated standing ovations, often booing, and in several cases walking out. 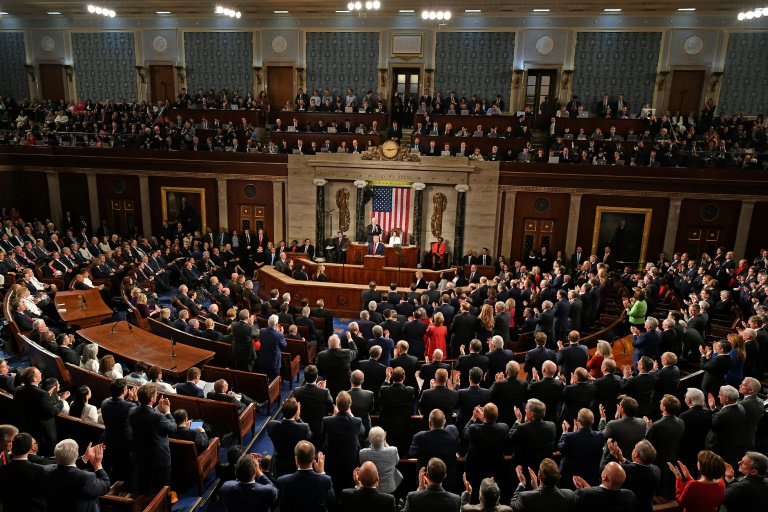 US President Donald Trump delivered a State of the Union address that the stage for his re-election bid later this year.Right-wing hero

Much of Trump's speech was taken up with proclaiming his successful economic policies and the "America first" outlook.

"We have shattered the mentality of American decline and we have rejected the downsizing of America's destiny," he said.

The Republican said his policies of deregulation and tax cuts - criticized by opponents as damaging the environment and favoring the wealthy over the poor - were responsible for "unparalleled" economic success.

He listed the North American USMCA trade pact, a trade deal with China, massive military spending, "unprecedented" measures to stop illegal immigration, and his bid to "end America's wars in the Middle East" as examples of fulfilling his commitments to voters. 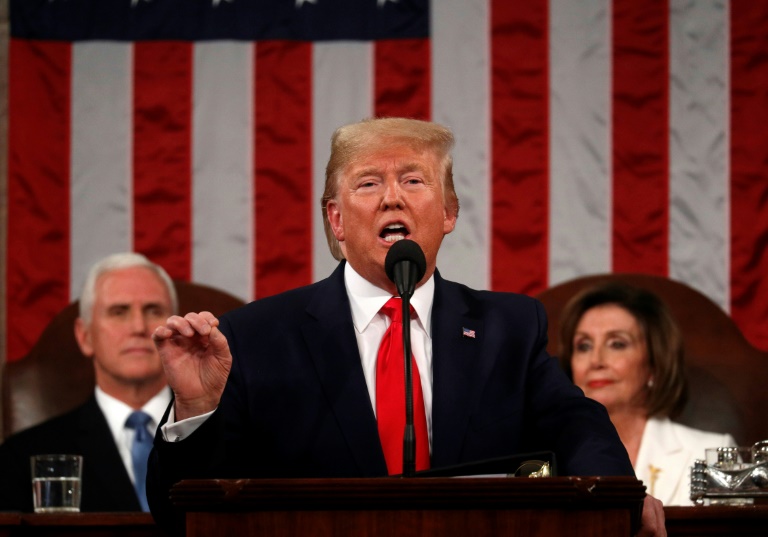 Donald Trump has got a lot of good news this week despite being only the third president ever to go to impeachment trial.

He threw his conservative base strings of red meat - tough talk on abortion, prayer in schools and right to bear arms.

But flourishes that could have come right out of Trump's days as a reality TV show entertainer grabbed the real attention.

At one moment he paused his speech to praise Rush Limbaugh, one of the fathers of America's hugely influential right-wing radio landscape, who disclosed this week that he has advanced lung cancer.

To the surprise of the packed audience, Trump announced that his wife Melania, who was alongside Limbaugh, was going to present the ideological star with the coveted Medal of Freedom - the highest possible civilian award.

Later, Trump outdid even this stroke of theatrics by singling out a woman in the audience whose army husband had been away for months on foreign deployments, then telling her he had "a very special surprise."

It was her husband, in full uniform, coming down the stairs for a tearful, surprise reunion - in front of a primetime national television audience.